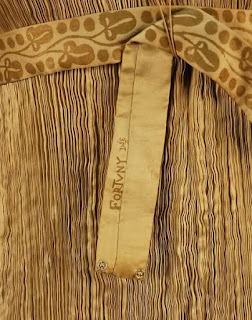 Mariano Fortuny was a Spanish fashion designer and came from a family full of artists. He painted, designed textiles, and created women's clothing among other artist pursuits. However, he is most notable for inventing the Delphos gown, a dress that broke with the fashionable silhouette of the period. Fortuny created his signature Delphos gown in 1907, repeating the design with minor changes until his death in 1949. The Peplos version features a tunic attached at the neckline, falling in points to the hip, giving the appearance of a two-piece garment.

"His wife, Henrietta, was an experienced dressmaker who helped to construct many of his designs. They lived in a palazzo in Venice. Fortuny drew from styles of the past for his fashion design as well, inspired by the light, airy clothing of Greek women that clung to the body and accentuated the natural curves and shape of a woman’s body.  Fortuny rebelled against the style lines that were popular during his time period and created the Delphos gown, a shift dress made of finely pleated silk weighed down by glass beads that held its shape and flowed on the body. He also manufactured his own dyes and pigments for his fabrics using ancient methods. With these dyes he began printing on velvets and silks and dyed them using a press that he invented with wooden blocks that he engraved the pattern onto. His dresses are seen as fine works of art today and many survive, still pleated, in museums and many people’s personal collections."  wikipedia 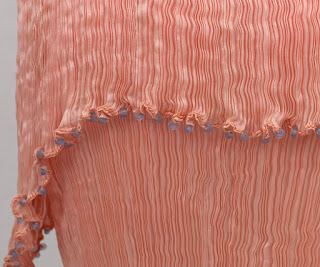 "This lightweight gown is based on the pleated linen chitons worn by Greek maidens 2500 years ago and seen today on Delphic Greek sculpture. The Fortuny Delphos and Peplos gowns have preserved the poetry of line of the Greek robe. During the Classical period (5th-4th centuries B.C.E.), Athenian women often wore the Peplos in public as a body length garment. 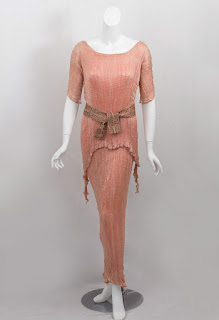 Fortuny used a thin silk satin more finely pleated than anything ever seen in costume. The resulting garment is incredibly soft and liquid, molding to the curves of the body. The richly modulated color of original antique Fortuny gowns, achieved by a series of dye baths, has a mysterious, enchanting depth that cannot be found in modern textiles."
Link to full article and more photos here

"It's still partially a mystery how Fortuny achieved these famed pleats — they were gathered by hand and went through a heat-setting process. The secret method involved laying wet silk on porcelain tubes that were heated. Many designers have tried to recreate his pleats, but Fortuny's remain one of a kind. The gown was stored twisted in balls to preserve the pleats, but when the pleats began to wear out the dress could be sent back to Fortuny for repleating.  The Delphos gown was considered anti-fashion when it came out in 1907, but gained popularity throughout the next 30 years. It helped usher in the fashion for soft and draped shapes, tunics, and, most importantly, the rejection of the corset. As women's dress became more liberated and daring, the Delphos gown transitioned from an at-home dress to an evening gown in the 1920s and 1930s."   Source

Worn uncorseted, and echoing the lines of the ancient chiton, Fortuny’s gowns had a forward-thinking, body-freeing simplicity. But the craft processes used to create them – pleating, cutting, cording, weighting with tiny glass beads – were of course incredibly elaborate.    Lillian Gish in Delphos below. 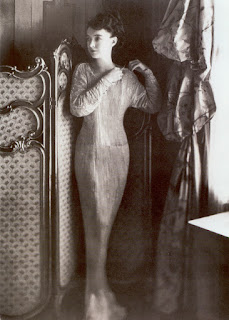 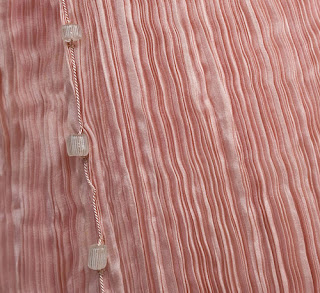 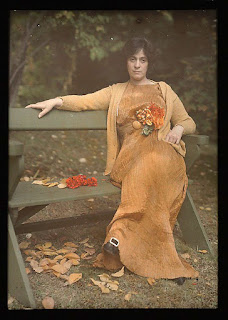 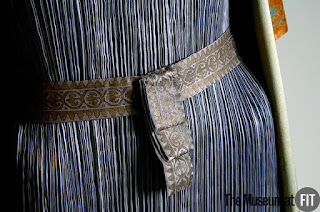 Above left, Fortuny dress (Delohos, 1907) and cape (Cnosos, 1906) exhibited at the Museo del Traje in 2010 as part of a Fortuny exhibition.   Amigos del Museo del Traje

His style was distinctly classic, a robe which slipped over the head and tied simply with a cord at the waist.  He first showed his work in Venice around 1907, and later in Paris.   His technique never changed.  Fortuny also printed fabrics and stenciled velvet (about right) for his fashions as well as for use in interior design.  His dresses were considered status symbols during the 1920s and 1930s and remain rare, expensive and collectible items today.

Below left, the Delphos gown was inspired by a famous ancient Greek sculpture called Charioteer of Delphi, from the sanctuary of Apollo at Delphi c. 470 B.C. Cast bronze.  Archaeological Museum, Delphi.   Below right, a James Abbe Photo of Natacha Rambova in a Fortuny Delphos. 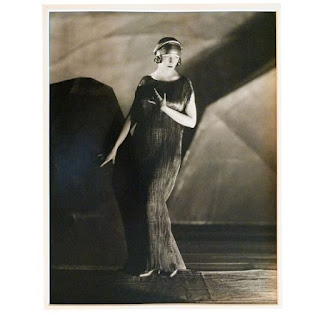 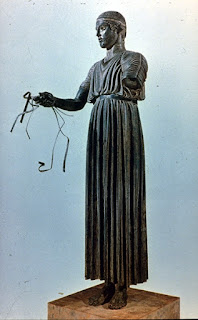 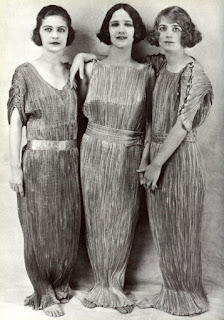 On the right is a lovely Delphos gown from the Metropolitan Museum of Art.  Please see this link to read all about this piece, and about Fortuny, who left only one document related to the development of his jewel-toned gowns—a patent for heated ceramic rollers through which the silk was passed to set the pleats.

Below are two Peplos gowns (with tunics)  from the Met Museum. 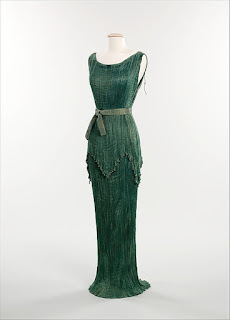 Msfabulous.com had this wonderful photo from a Fortuny exhibit in 2012 at Queen Sofia Spanish Institute in New York. 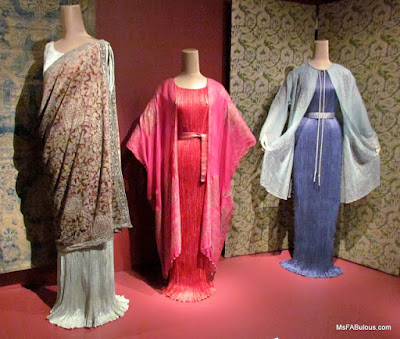 On these gowns were beautiful, gold stenciled belts. 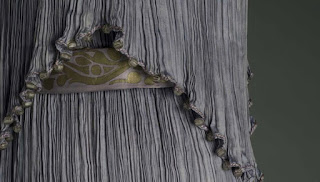 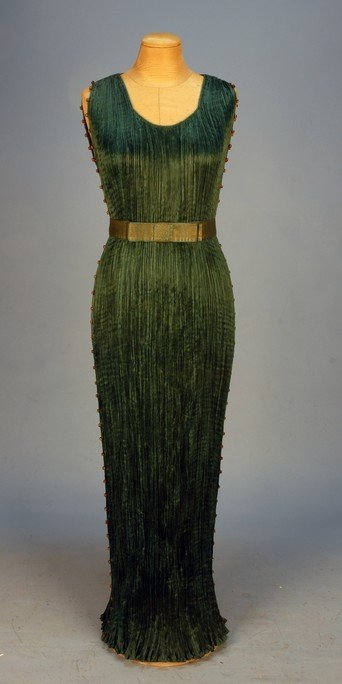 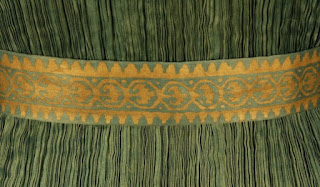