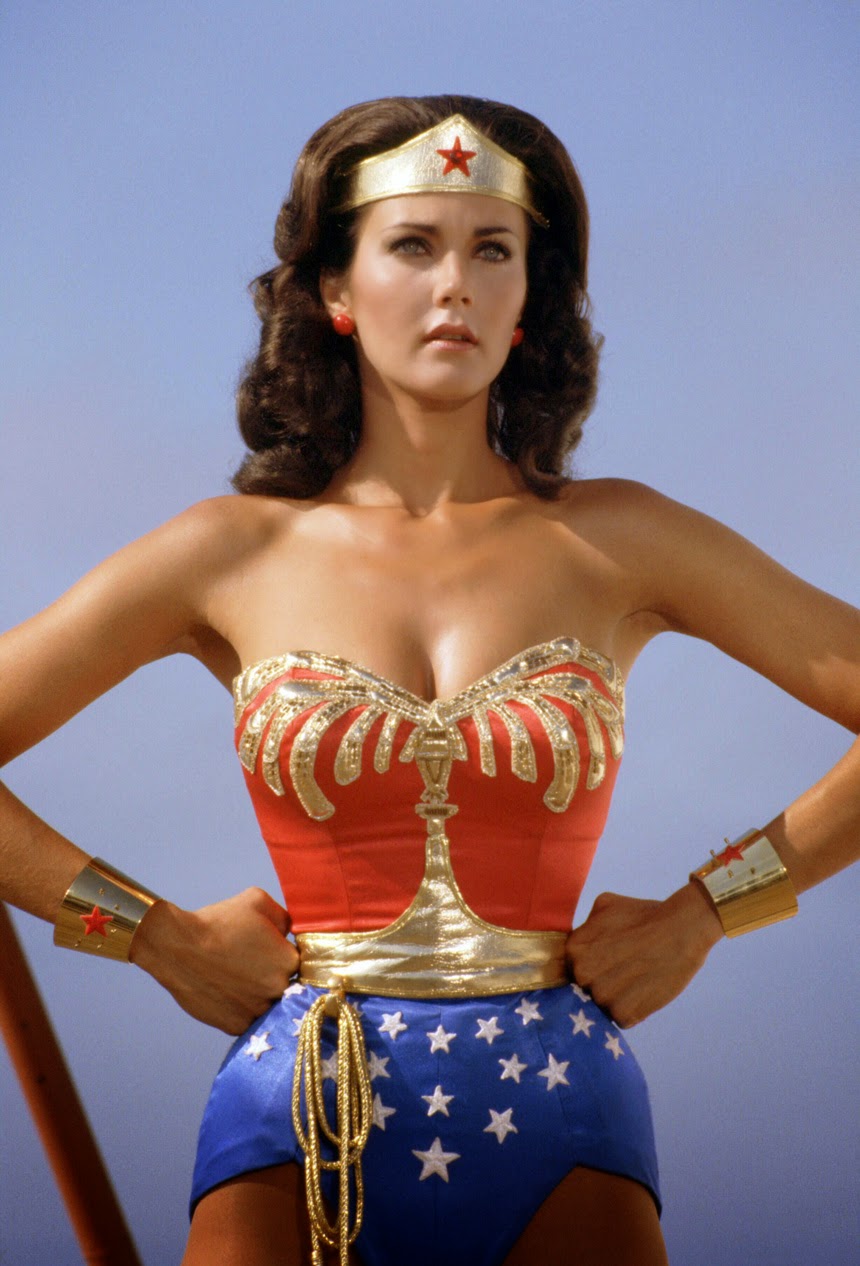 I have had this idea floating around in my head for almost a year, and decided to go for it for Comic Con.  I love Wonder Woman, but wanted to do a mash up costume.   I ain’t getting any younger, and I am way past the bustier, tight shorts traditional look.  I love bustle gowns, so it was natural to use this as my mash up theme.
For me, it was all about the boots!  That is where I started.  I LOVE them!  I knew when I made my skirt, it would need to be split up the front so the boots could peek out.   I didn’t want a “saloon girl” type where it was all open, just split for easy boot access!  Standing still, the skirt should look nearly closed.  The boots are Funtasma Pleaser brand, bought on Amazon. $35. 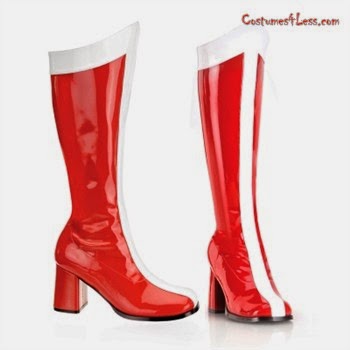 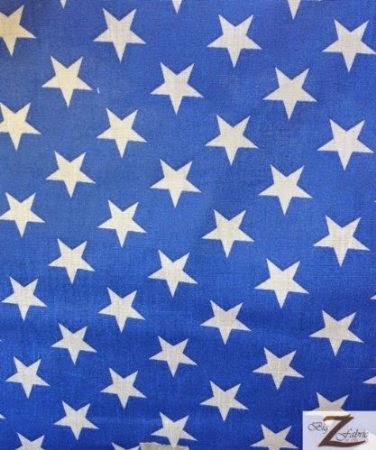 My friend Joanne planned to be Harley Quinn with a Victorian twist, so we went to the fabric district in Los Angeles for inspiration.  I knew I wanted star fabric for the bustle skirt.  There were several stores that had blue fabric with white stars, in the $3-$3.50 a yard range.   I kept passing them by thinking the blue was too light.  I found one that had more of a dark blue background, but they wanted $15 a yard!   I left thinking I would be going back soon if I didn’t find anything else.  After getting home, I realized that it WAS the correct blue after all!  Grrrrrrrr....  I did, however, pick up a shiny gold tissue lame for my overskirt.

THE SKIRT.
Since this was for Comic Con, I didn’t want a train on my skirt.  I decided to use Truly Victorian 201 - 1870s Underskirt.   Since it was split up the front, you would be able to see the seams inside when I walked.  I used a cheap $1 a yard poly satin in royal blue and made an underskirt that was basically inside out, so the seams were inside, next to the star fabric seams.   Next came the fun part!  I pleated all around the bottom, about a twelve yard strip, down to around four yards.  Since it was all cotton, I sprayed as I ironed the pleats with a half and half vinegar and water solution.  Those pleats aren’t going anywhere, they are set forever!

It needed a background between the ribbon and skirt fabric so I got 5 yards of red ribbon and pleated it. $3.50.


I wanted the two layers of skirt to be separate, but in the front where its split I did sew the two layers together and put red piping on the edge.  This created two “flaps” in the front when I folded back the sides. Since you could see underneath, I couldn’t wear a bustle or a petticoat.   It was going to be very flat without some kind of fluff.   I decided to gather lengths of tulle between the two skirt layers.  That worked out great!  I still wanted a bustle.  While talking to my friend Val, she offered to loan me her small bustle.  It fit snugly over my rear end without anything hanging down where it could be seen.

I used Truly Victorian’s 1872 side drape overskirt.   The tissue lame was very thin and see through.  I flat lined it in white (from remnant stash), then backed the side pieces in red cotton.  It made the side drapes ripple in both colors.  A yard of red tassel ($1.50) around the front and done!    3 yards of lame were $1.25 a yard and 1 yard red cotton (used for the bodice as well) was $2.40 a yard.

I used Truly Victorian day bodice pattern.  I got 3 yards of red cotton ($7.20) and used stash for the flat lining.   I needed some kind of gold for the eagle wings, cuffs and trim, but didn’t know what I would use.   I didn’t want to use the lame as it was too lightweight.   Hmmmmm.   I decided to see if I could find some gold vinyl.  I was on my way to the yardage store and decided to pop into a nearby antique/thrift store first.  So glad I did!   I found four gold vinyl place mats for 50 cents each!  I never went to the yardage store after that.   The first sleeves I made were long, with gold cuffs. 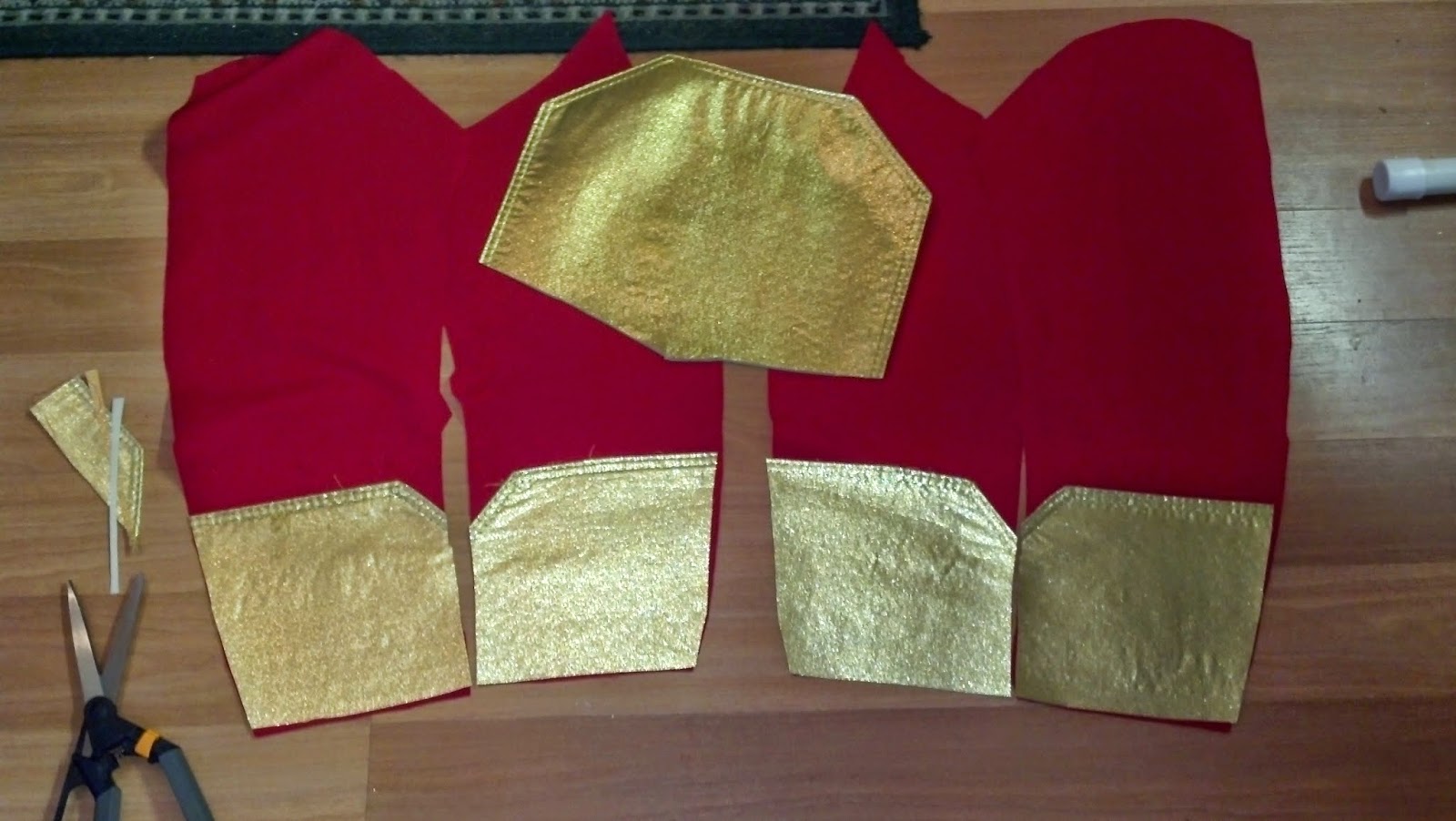 After looking at them for awhile, I decided I didn’t like all that red on the top half.  I went with short sleeves.  These second sleeves didn’t work either, it made the bodice look like a regular shirt.   Joanne suggested I make puff sleeves and gather them onto a gold arm band.   Third time’s a charm, they worked.   I used the gold down the front of the bodice and got 12 gold eagle buttons for closures.

Trying to transfer one of the eagle wing versions onto a bodice instead of a corset was a challenge.  I went through a few different ones until I settled on Lynda Carter’s design.  I found a photo of her costume and cropped the design.  Then I blew it up on the copy machine until I was satisfied with the size.

I cut it out and used as a base pattern for the bodice.   It is a simplified version of hers, but I was running out of time. I cut each side as one piece instead of individual “feathers” from the gold place mats.   It was pretty flat looking so I glued it to a square of felt.  Then I outlined each side in gold bugle beads.  Finally, I whipped stitched the feathers down.  The heaviness of the beaded wings caused a bit of puckering but that’s ok with me.  Beads were a bit pricey, about $7. 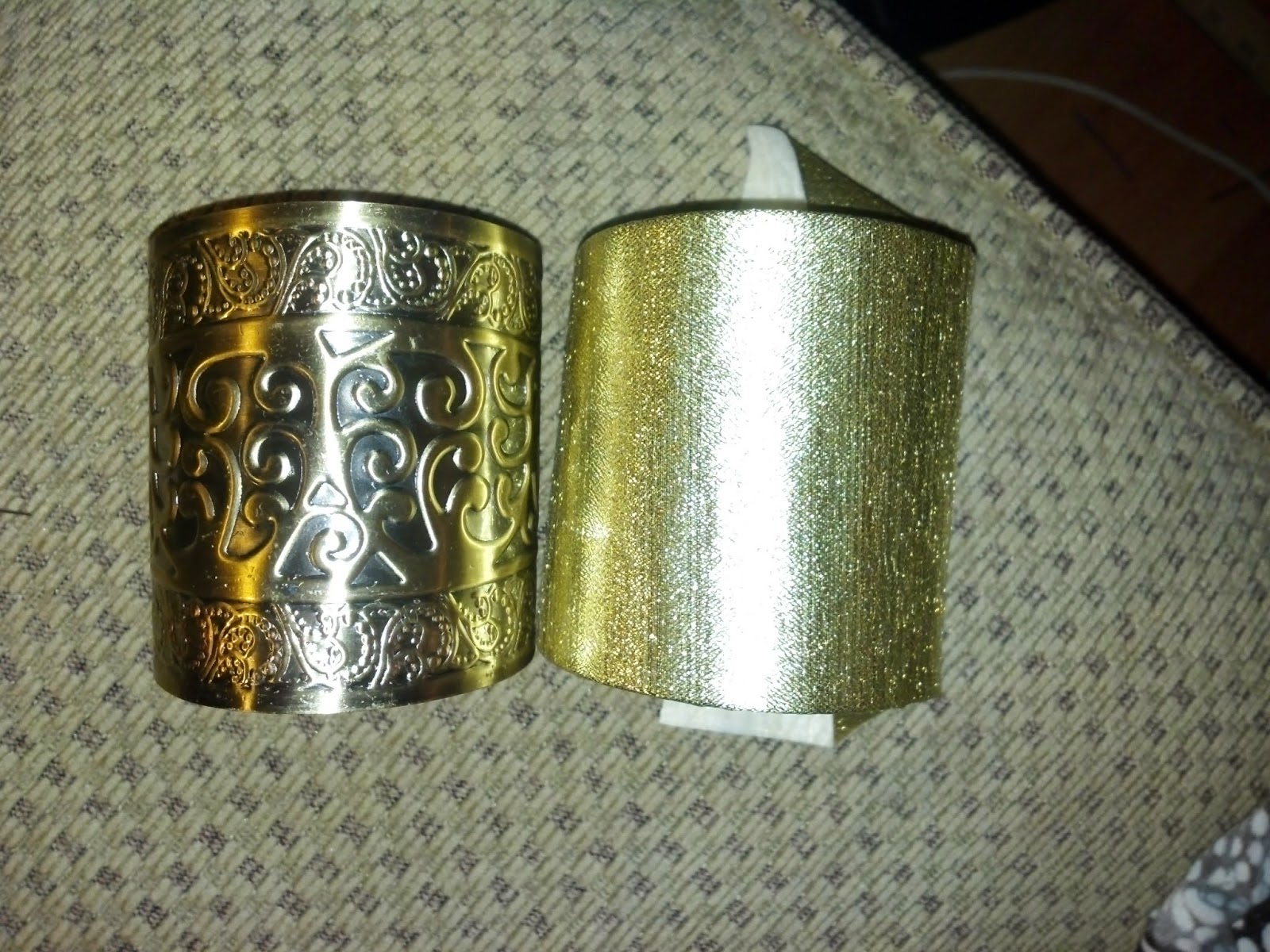 Arm cuffs.   I borrowed Joanne’s silver cuffs that had scrollwork on them, and used the trusty place mats again.  Since I am giving the bracelets back when I find real gold ones, I just whipstitched the gold on.  I used red star appliques as well, stitched on.

Tiara.   Last Halloween I was golden Artemis.  I used the same tiara, but backed the open filigree with the solid gold (place mat again).  Then I stitched on another star applique.

Necklace.  Left over jewelry findings from convention favors I made.   I just printed a cartoon of Wonder Woman and glued in the cabachon.

Wig.   I LOVE this wig!  It was an official Justice League Wonder Woman wig by Secret Wishes.  It was perfect coming out of the box and all I did was shake it out.  $21.00 on Amazon.

I wore red fishnets I have had for years so no expanse of bare thigh peeped out.

That’s about it!  The following are photos from Comic Con as well as Costume College’s gala night. 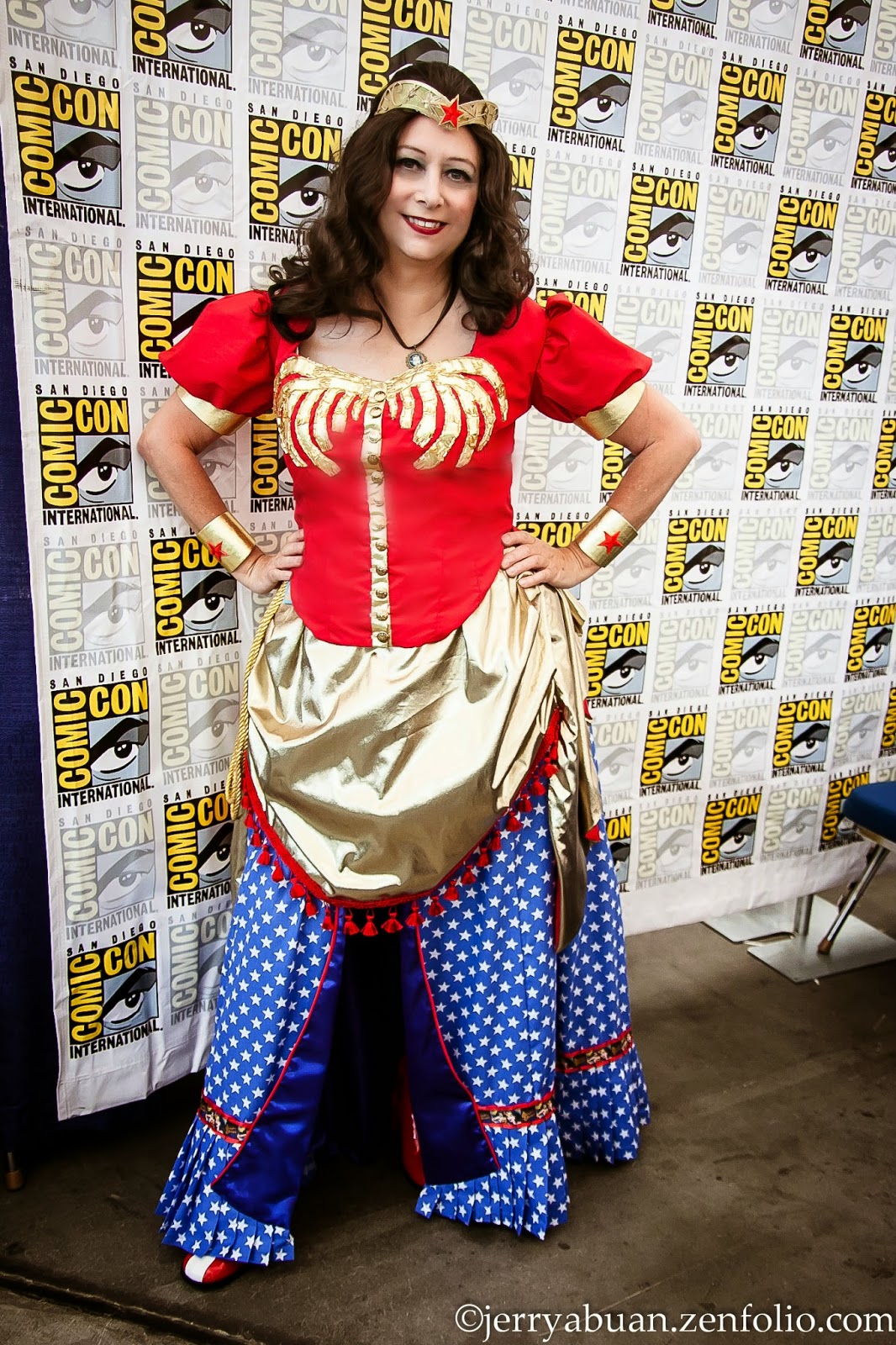 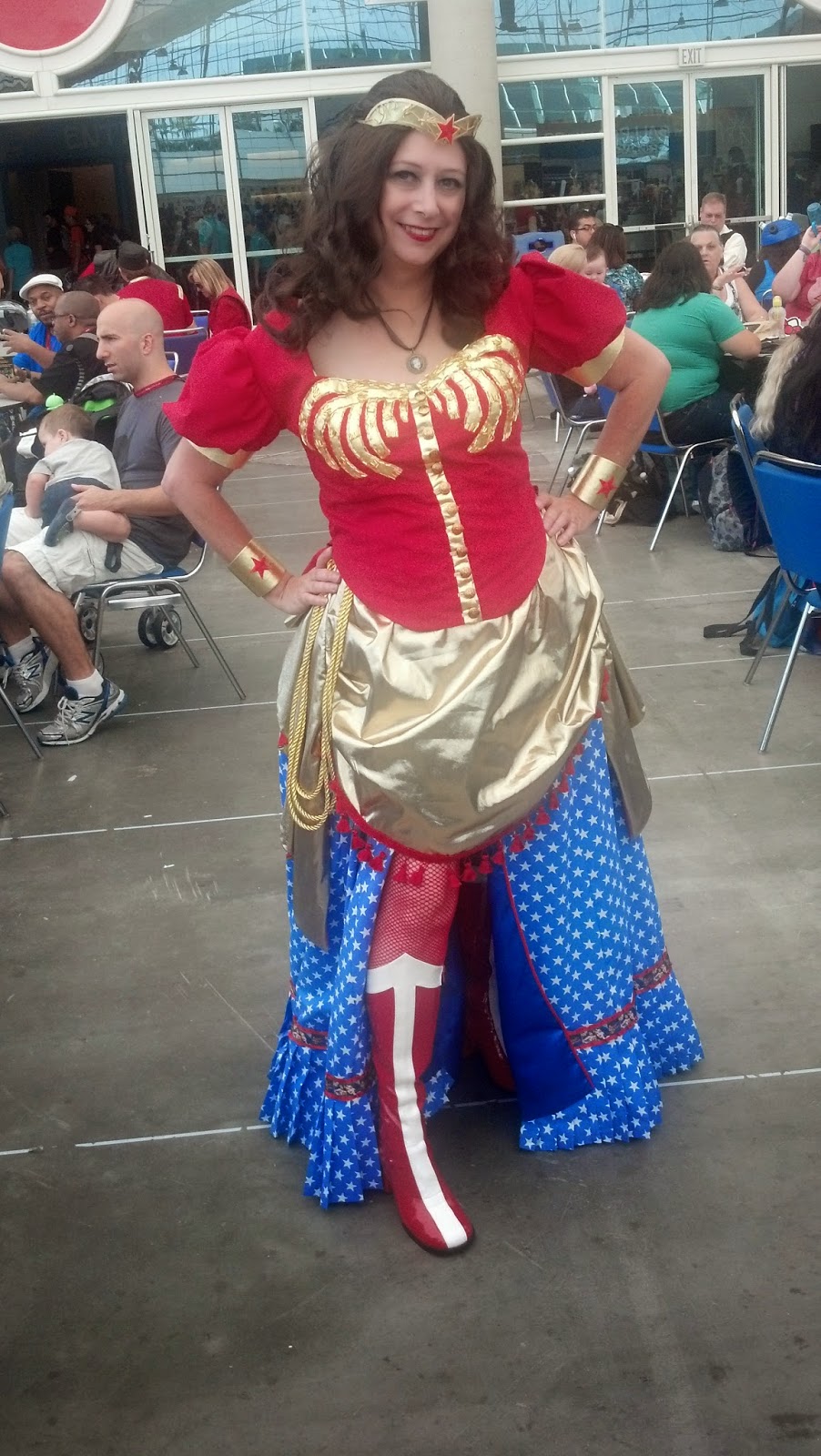 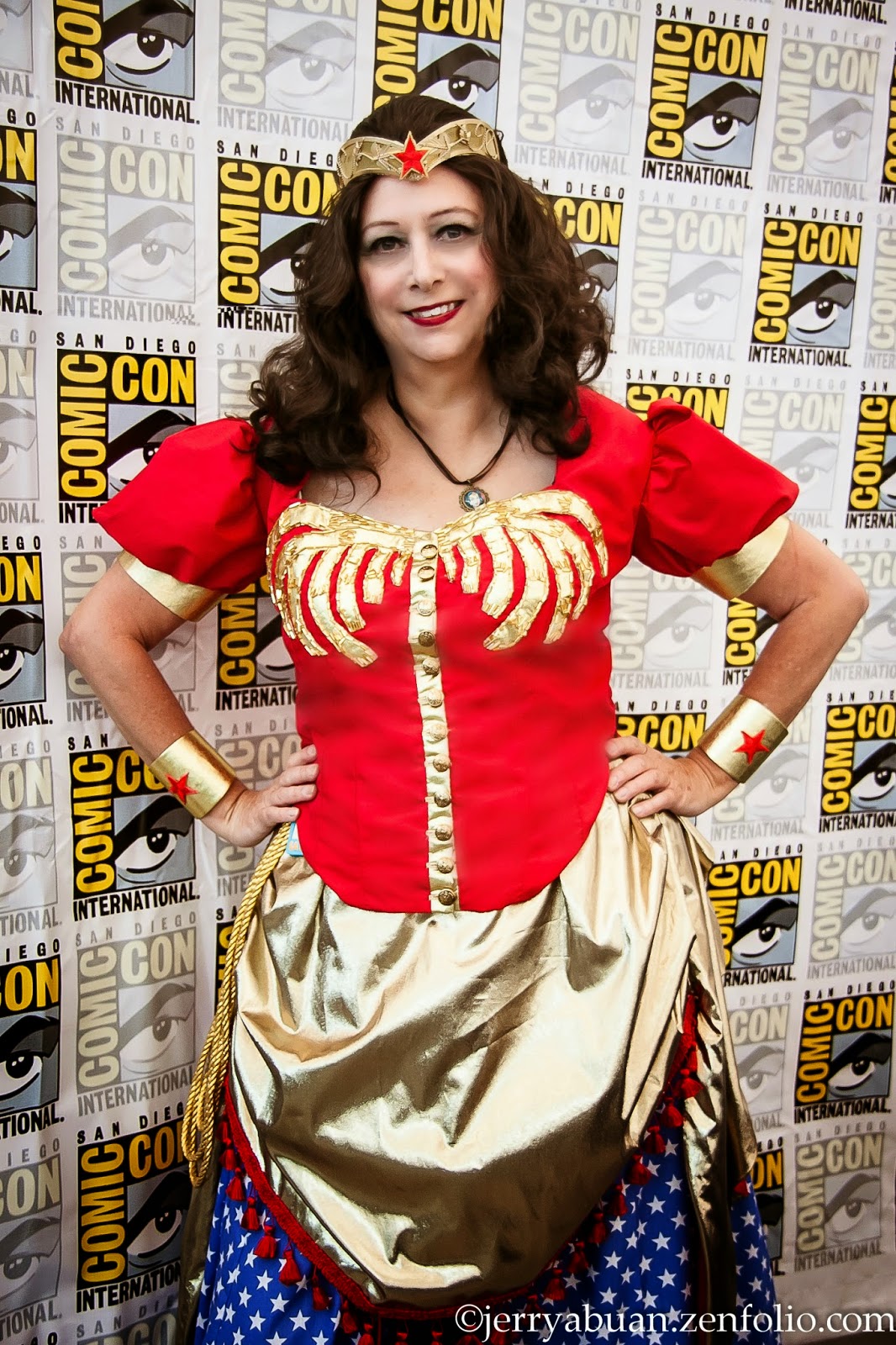 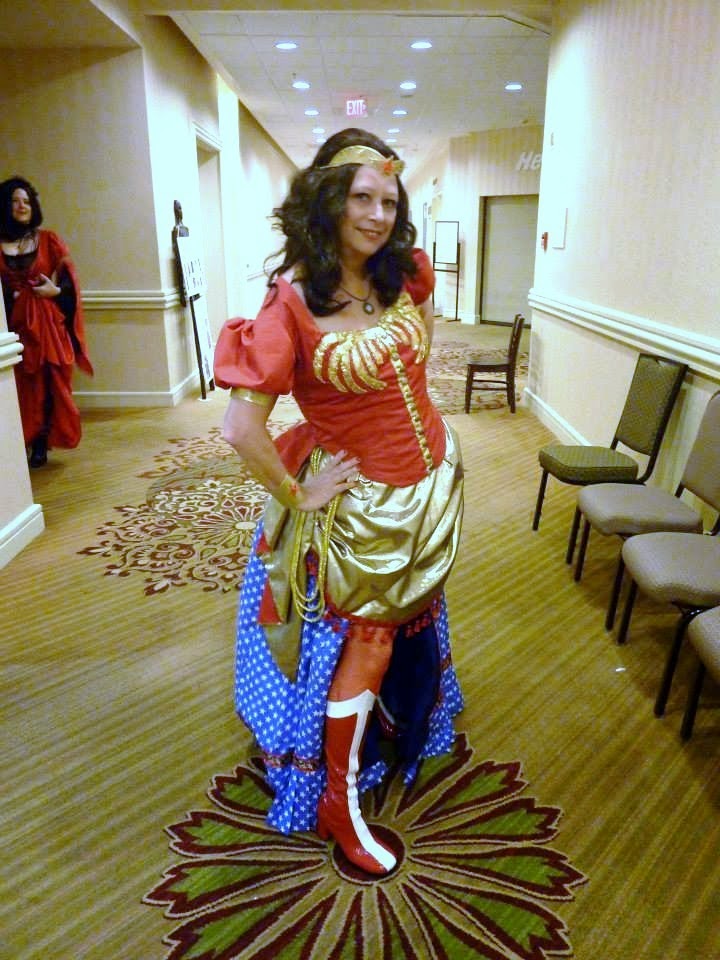