Recuperating from a wonderful weekend at the Dickens Festival, so thought I would write my newest installment.  I have been going to Dickens for several years and have always enjoyed the fashion show.  This year, Nancy Smith presented Victorian Literary Characters from 19th and 20th Century Books.  The second half of the show, Valarie LaBore organized 100 years of mourning 1810 to 1910.  We had one from every era, but unfortunately we lost a few models due to work schedules, flu and injury.  There were still beautiful gowns to see!

For the first half, my character was Countess Ellen Olenska from The Age of Innocence.  I wore my seafoam green natural form gown I previously blogged about, but added a black fur muff, black faux fur capelet and hat.  Here I am!


The second half, I had to come up with another mourning gown.  The 1870s were taken, so I couldn’t wear the one I just finished.  So I decided on 1910 - because I wanted to do Black Ascot Races!  The dresses were elegant yet simple, and it was all about the big hat.  My description:

A highpoint of the British social season, The Royal Ascot Race represents a glittering legacy. In 1910 tragedy struck. His Majesty King Edward VII died! What was the world of fashion to do? The King was a passionate Ascot attendee, and would have never agreed to the suspension of the week-long race meet. So although the Royal Box was quite deserted, with the Royal Family in seclusion, outside of the Royal Enclosure it was as packed as ever at the races, although out of respect, the elite were clad in black and grey.

Cindy is wearing a layered style dress popular through the teens.  The over skirt and sleeves are made from a sheer dotted swiss.   Velvet eyelet trim is used for the collar, cuffs and belt.  A cotton applique is used as a bodice insert.  She is ready for outdoors with her walking umbrella and large hat, covered in black velvet and ostrich feathers.  On her left shoulder she wears a memorial rosette of King Edward, as did most  race attendees.   Binoculars for viewing the race, gloves and double strand necklace complete her outfit.

Val and I were wowed by an Edwardian striped jumper and blouse that Arlene Terrell made which she adapted from a modern Simplicity pattern.  Val bought the pattern, and I borrowed it for this project. 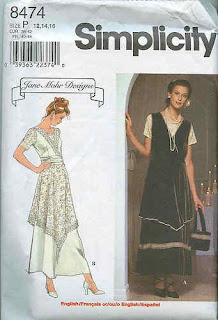 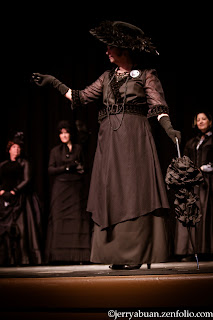 I changed it even further.  I wanted a dress instead, so I just used the bodice cross over front piece, the skirt, which I lengthened, and the pointed overskirt.  I drafted my own sleeves from a photo I saw.

For my birthday, I received a gift certificate from my boyfriend for $50 to Yardage Town.  Off I went with my friends Joanne and Michelle.  I picked a cotton poly blend for the under skirt and bodice.  For the overskirt and sleeves, Michelle found a wonderful 100% cotton sheer dotted swiss.  Yay Michelle!  I got 12 buttons on sale for 50% off.

All other items were from what I had lying around the house.  The hat was an old floppy sunhat that I wired, then covered in a velvet scrap.  I took an ostrich boa and cut it to fit around the crown.  I made the King Edward rosette from an old pinback button I got at Comic Con.  I used Mod Podge to adhere a photo from the internet on to the button, then used grosgrain ribbon folded into triangles around the edges.  The velvet eyelet trim was in my stash, bought at the swap meet a year ago.  I also made the belt by taking the same eyelet trim and sewing it on to a buckle from a thrift store belt.  The black applique I used for the bodice inset I have had for years and never knew what to do with!

I think I am done with black for a long, long time.  Here are a few photos.  I hope you like them. 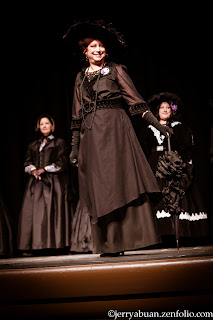 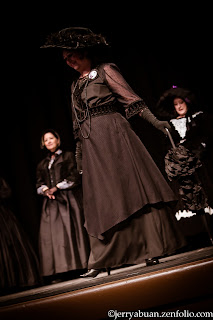