What are Opera Hoods?

I was scrolling through Facebook, and on Izabela of Prior Attire's page, I came across the prettiest lacy headpiece she created.  She called it an Opera Hood.  Please click this link  Prior Attire FB page  to see her version.  Here is her website too.   Prior Attire website

I had never heard the term before, and immediately started looking it up.  Was it to wear while watching the opera so people didn't have to look around your hat?  Was it to get from the carriage to the front door?  Did you leave it on or take it off? 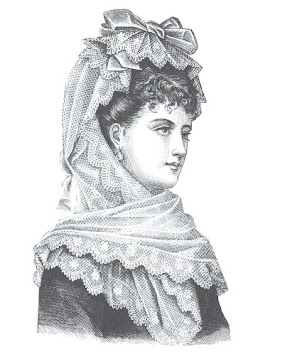 The first pictures I found were very similar to the one made by Izabela.  This one on the left is from Harper's Bazar, May 1876.

The Harper's Bazar magazine picture below was published February 1882.  The text reads:  "Spanish Lace scarf worn as an opera hood.  The drapery is secured on a small fauchon-shaped frame which is cut out of stiff net, wired at the edge and and covered on both sides with straw colored lining satin. To the back of this is joined a hood shaped piece of similar satin, which is held in by draw strings at the bottom, and finished with a bow of the same satin ribbon, 2 1/2 inches wide. The scarf, with all corners faced with the same satin, is draped with the straight side to the front, the folds being fastened to the frame and lining.  The right and back corners are caught up in the drapery, the left end, which is pleated,  and trimmed with satin ribbon bow, is brought across the front and fastened on the right side." 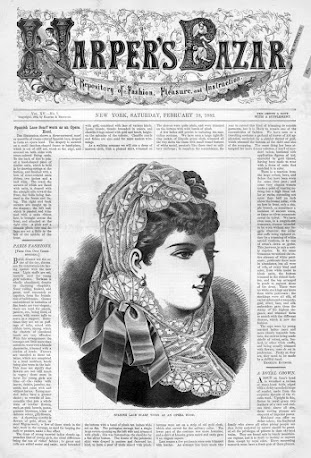 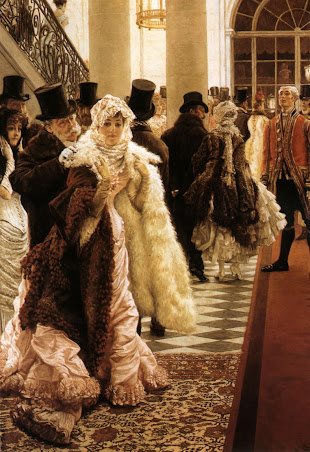 I then remembered a painting I saved in my computer awhile ago by James Tissot, (saved for the pink dress I hope to make someday) and looked it up again.  Sure enough, here are elegant couples arriving at the theatre wearing lacy opera hoods.  In the close up below, we see the main figure removing her coat, and to the right, the back view of another woman with an opera hood. Seen in the full size picture are three other women in the painting: one in the center with uncovered, curly hair, one with a small hat near the front door, and one on the left whose coat is off, but she is wearing a black lace head covering.

For an evening at the theatre, a simple dress, not low in neck or short in sleeve, was worn with a bonnet. For the opera or for concerts, more ridged rules applied. “Here,” one etiquette book lectured, “you should wear full dress, an opera cloak, and either a headdress, or dressy bonnet of some thin material. Your gloves must be of kid, white, or some very light tint to suit your dress. Many dress for the opera as they would for the theatre; but the beauty of the house is much enhanced by each lady contributing her full dress toilette to the general effect".    source 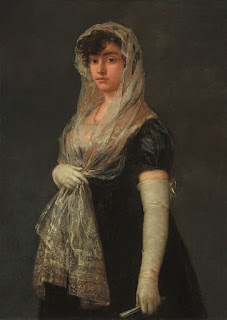 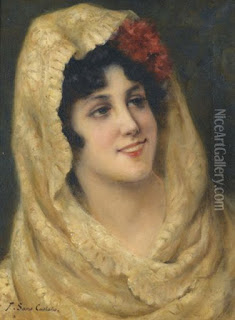 These opera hoods are from the Delineator Magazine, September, 1900 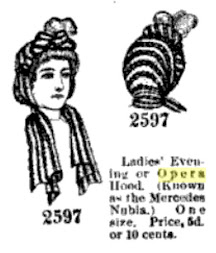 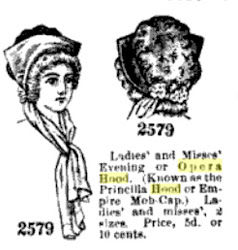 In the 1881 London and Paris Ladies Magazine it states:  Opera cloaks all partake of the Dolman style, and nothing can be more convenient. Lace Hoods are very much worn for the theatre: the Cape Hood which covers the shoulders as well as the head, is one of the most useful styles for the purpose.  Maursque, Grecian and Spanish lace are in great demand.

Another very similar Victorian head covering is the Cloud because the name is so evocative of the garment. It was rather a latecomer on the Victorian fashion scene, with the earliest reference in 1872. a cloud is “a light, loosely knitted scarf. Both ends could be fringed, or only one end fringed and the other finished in a tassel. One end of the cloud was often worn over the head, the other slung over a shoulder.” A cloud might cover the head for outdoor wear and be wrapped as a stole when indoors. source  Several cloud patterns (none illustrated) can be found in the Weldon’s Practical Knitter series. A cloud is generally 1¾ to 2 yards long.     One definition of a cloud reads as follows:  "Cloud 1870s.  A long scarf worn as an outdoor head covering, with evening dress.  ......"in a swan's down clock with a white cloud" (1888 R. Kipling, Plain Tales from the Hills)."

When did opera hoods become fashionable?  I started looking for them before the mid 1870s. 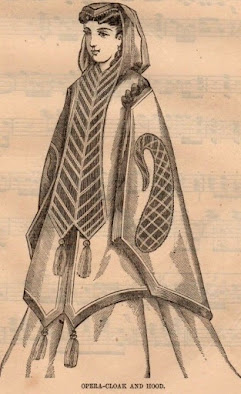 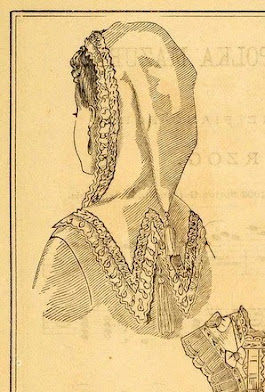 Above left is an 1868 drawing from a fashion magazine that shows an opera hood and coat for evening wear.  Simpler than the 1880s, but still light, airy and sheer.

Above right is a pattern advertisement for an "opera or evening hood" from 1871. More solid than the lace ones above, its still edged with dainty lace. 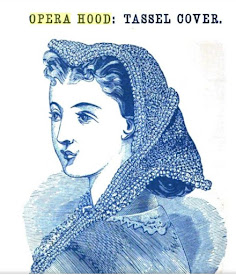 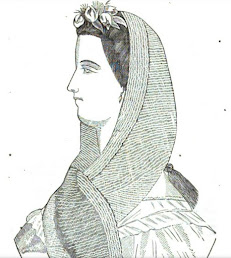 Above are two finely knitted, pretty opera hoods from 1865 Peterson Magazine, the left for day, the right for evening wear.

Below is an 1865 ad from another magazine, using the same day hood pattern as the above left. The day hood is knitted and the evening hood made of satin and ribbon. 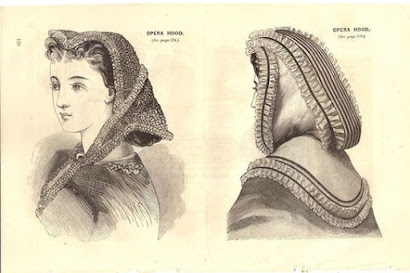 On the right below is a Spanish opera hood from 1863. 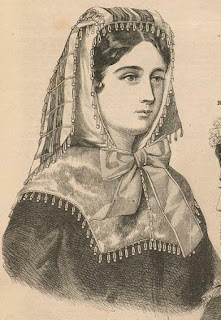 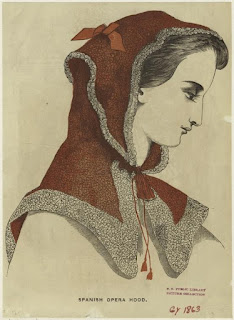 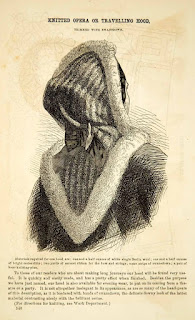 An 1862 Godey's Ladies Book shows instructions on how to knit this "Opera or Traveling Hood"  The text states "To those of our readers who are about making long journeys, our hood will be found very useful.  Our hood is also available for evening wear, to put on in coming from the theater or party." 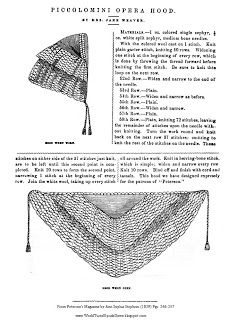 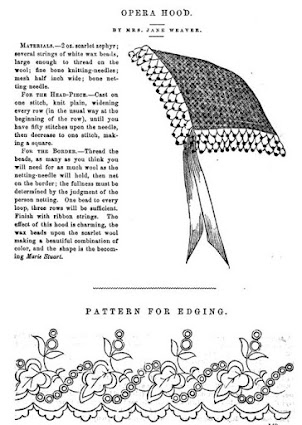 Above, left:  A beautiful opera hood from Peterson magazine from the 1850s.  The hood is made from 2 ounces of scarlet zephyr,  several strings of white wax beads, large enough to thread on the wool, fine bone knitting needles, mesh half inch wide and a bone netting needle.  The effect of this hood is charming, the wax beads upon the scarlet wool, making a beautiful combination of color, and the shape is the becoming "Marie Stewart".

From  1858's Graham's Illustrated Magazine,  General observations of fashion and dress section: Cloaks of the bournouse form continue to be highly fashionable. Those made of black velvet are most rich and  elegant.  The hoods are ornamented with passementerie and tassels.  the velvet hoods are frequently made to be taken off at pleasure, for the purpose of substituting a hood of lace when the bournouse is intended to be worn at the opera, or the theater.   The lace hood drawn over the head is at once convenient and becoming.

From Peterson's Magazine 1858.  Opera hoods, were also known as traveling hoods. These were worn at night for warmth and modesty. It was better than wearing a bonnet because in carriages, your bonnet or hat is likely to be blown off. They also could be made fancier to add excitement to a dress as most people only had a few dresses and accessories and adornments were used to give an outfit a new feel.

This fashion plate is from Journal des Demoiselles circa the early 1850s. The lady arrives for an evening event in her opera hood and coat.  Her friend has already removed both. 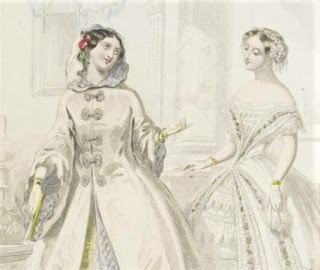 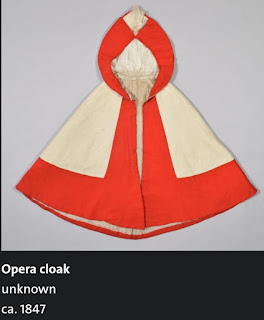 Here is a bit of fun.  We all know that costumes in Hollywood movies from the early years are in no way period correct.  For example, 1939's Gone with the Wind.  Is Melanie's knitted hat intended to be an early 1860s Opera Hood/Traveling Hat?  It kind of resembles this cute knitted hat from the same period.  Is Belle Watling's froth of tulle intended to be an Opera Hood or maybe a Cloud?  Ugh! 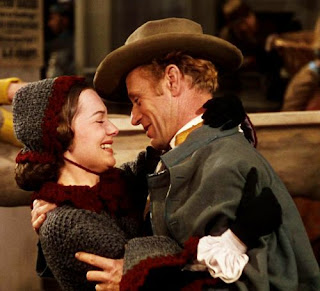 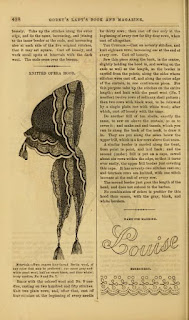 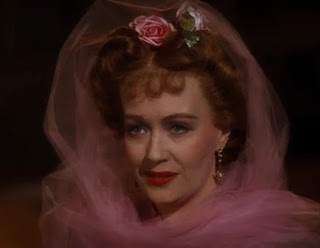