I am super late on my post about Costume College at the end of last July, and the great theme of Royalty.   There were five costumed events to attend:

Phew!  That's a lot of events.  I could only attend four.  I had to miss the Sunday breakfast because I was in charge of the afternoon tea, and needed to get everything ready for 130 guests.  So I came up with four costumes.


SUNDAY TEA
The Sunday tea was easy.  I wore my outfit "The Bluebird of Happiness" from my fancy dress fashion show in October 2017. See previous post about dress  Here are a few photos from the tea, taken in our photobooths. 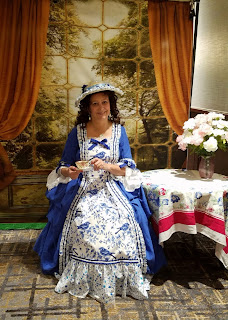 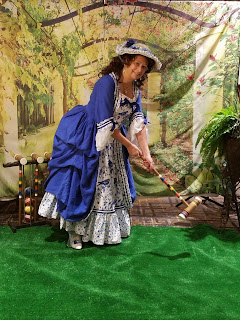 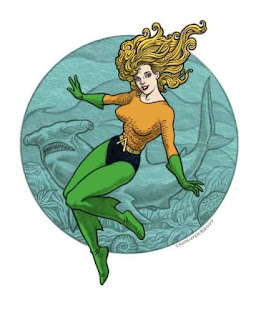 For the Thursday night pool party, I wore my Aquawoman costume from Comic Con the week before.  This was a super easy costume, all bought pieces.  I found a pair of green mermaid leggings on Amazon, added a green chiffon high-low skirt over it.  I used my green belt from my Green Lantern costume, and swapped out the buckle for an official Aquaman one from Ebay.  An orange T-shirt covered with a black fishnet T-shirt to represent the fish scales in the cartoon version.  I had regular green gloves, but didn't want to take them off and on all day to use the phone and camera, so I got some green fishnet gloves at Party City.  Also at Party City I found a gold "goddess" crown.  I glued a shell and seahorse on it and sprayed it gold.  I got a cheap $8 wig on ebay, that was better than the $22 one I bought and didn't like.  Finally, I made a trident from a black plastic pitchfork from a Halloween store I had for a few years. I glued shells on it and sprayed the whole thing gold, then glued a jewel on it.  Here are a few pics from Comic Con and Costume College. 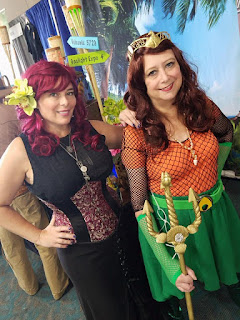 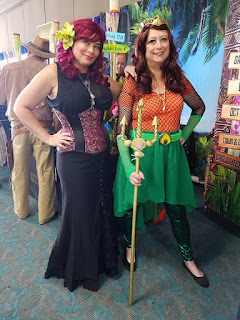 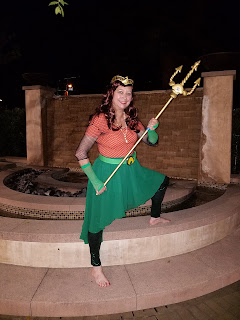 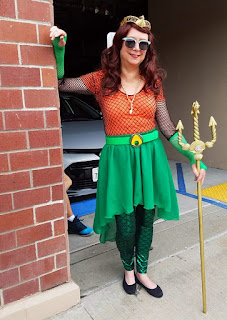 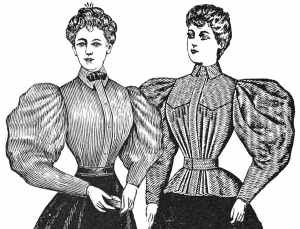 For the blouse, I bought 3 yards of Eiffel Tower fabric at Walmart for about $15.  The skirt fabric was from the L.A. fabric district and only cost $12.  Buttons were about $3.  I had a bright pink velvet ribbon which was attached to the back of the neck and went down to about hip length.  My purse was Fifi the dog, bought on ebay for $10 shipped. I decorated a boater hat with left over ribbon and fabric and a buckle.  Below are construction photos and to the right, one with Kristin and Joyce. 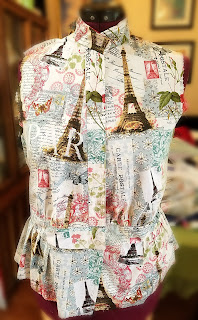 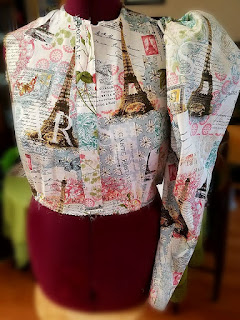 Putting the blouse together.  This was a very easy pattern.  I used a few layers of netting in the sleeve heads to make them poof out.   Not a big fan of the huge sleeves, but for this outfit, I wanted them, as it was more of a "fun" look than historical. 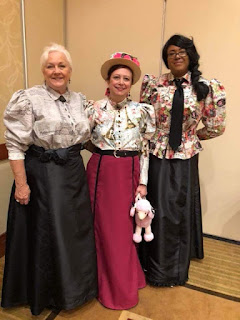 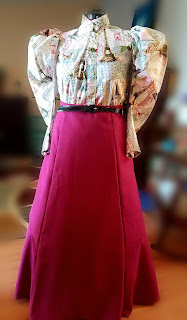 Left:  Almost done!   I did end up using a wider belt.  I added black velvet ribbon to the seam lines to give it some pop. I added large black buttons where the two seams meet on the bottom fronts.


Below:  Isn't Debbie cute in her red Eiffel tower hat? She took the other two photos. 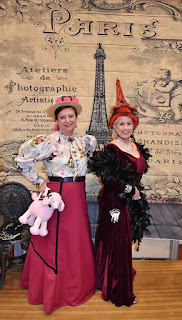 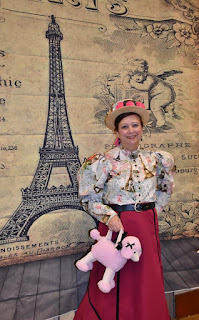 SATURDAY NIGHT GALA
I didn't have a lot of time for sewing and wanted a simple but elegant royal gown.  Originally I was going to wear this to the Friday social, but was invited to the Royal gala dinner by Val.  In fact, the lovely velour fabric was a birthday gift from Val!  I used this Simplicity pattern, but extended the bodice in front in order to be able to pin it together under the bust.  Now that I think of it, the pretty gold trim was purchased from Val's stash. For the dress, I used a cream cotton with gold dots. 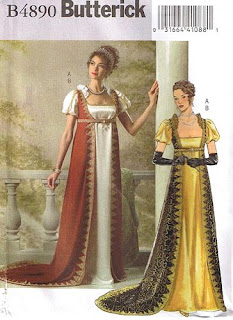 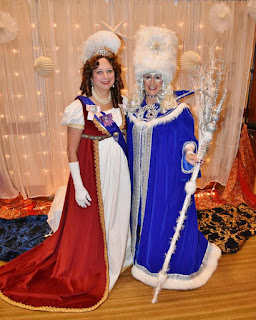 I made a few Royal orders to attach to the sash.  Yet again, Val added to this outfit by gifting me with a lovely Order, with my initial. Look at Debbie's beautiful Russian outfit! 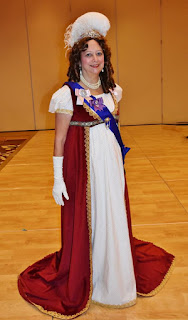 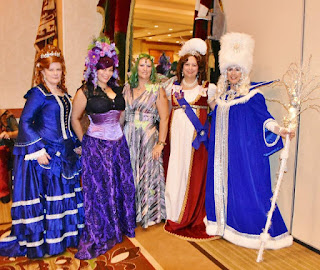 Above, my royal friends Birda, Joanne, April and Debbie.

And as all Royals do a a party, here I am with April doing "The Time Warp" 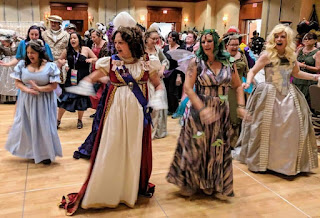 Another wonderful year of Costume College done, and it went by so fast. See you next time!
Posted by Cindy at 2:23 PM