In going through my cabinet cards looking for sewing inspiration, and studying the different styles and fabrics used, my main thought usually is, "I wonder what color this dress is?"  I know that there couldn't be that many black dresses out there, and I also know that what looks like a black dress could be vivid red.  But is there a way to find out what colors these actually are?

There are people out there who are masters of photoshop and other programs, colorizing old photographs beautifully.  But these are the artist's concepts of what they want to see.  They may not be the actual color of the original.

First I must do a shout out to Olga of Klimbim.  She does the best colorization of vintage photos I've ever seen, believable and soft.  For example, this lovely, lovely early 1870s portrait.  You can discover more photos on her facebook page  https://www.facebook.com/klimbim.art/  She does have a website, however its in Russian.  The photos are beautiful though!

Olga interprets this dress as pale blue.  In reality, it could be any other color, including a darker color. 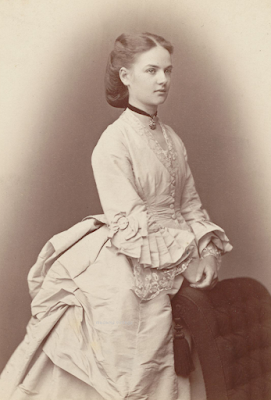 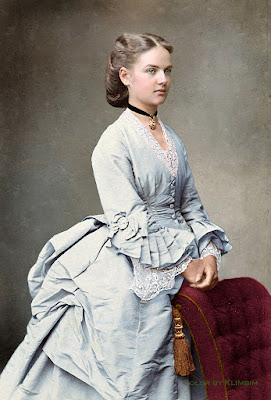 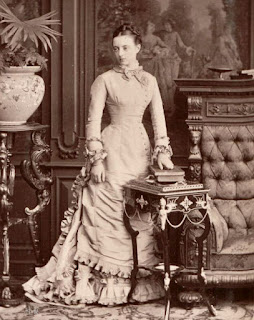 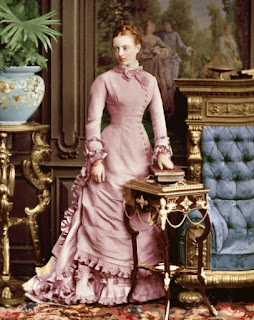 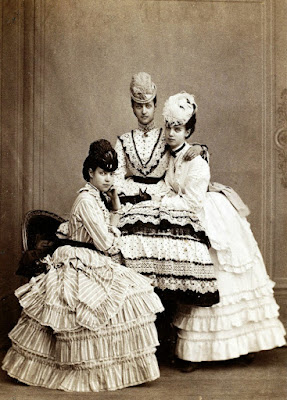 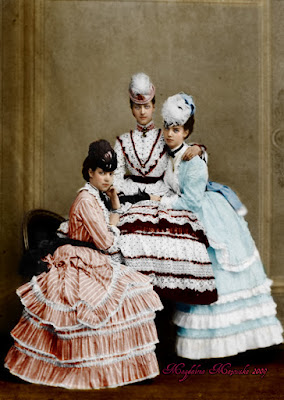 Another digital artist who does "photo manipulation" is GuddiPoland, who is found on Deviant Art, above right.

Above left is the original photo of the royal sisters Tsarina Maria Feodorovna of Russia, Queen Alexandra of the United Kingdom and Thyra, the Crown Princess of Hanover and Duchess of Cumberland and Teviotdale.

The photo on the left is colorized by Velkoknezna, also on Deviant Art.  I even found another example by a third artist with different coloring.

Which colorway do you like best?  More important, what are the ACTUAL colors of these dresses?

On the other side of the coin, you cannot take a color photo of a gown and use photoshop or another program to de-saturate it, and expect the results to match an original photograph. 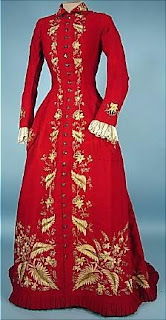 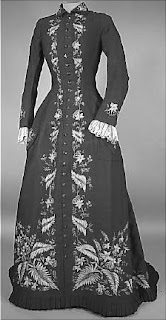 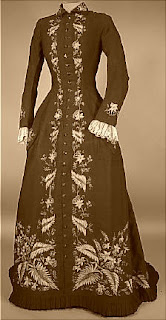 I was curious to find out if a 19th century photo can be turned back into its original color by assigning colors to the values of its grey scale.

DISCLAIMER:  I know nothing about photography, let alone 150 year old photography, so this post will be in layman's terms to the best of my limited understanding.  Even after reading several articles, I still don't really understand the chemical equations and other science-y things.

Obviously, the easiest way to determine the actual color of an outfit is to find the original extant garment in the photograph in question. 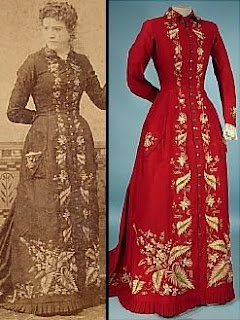 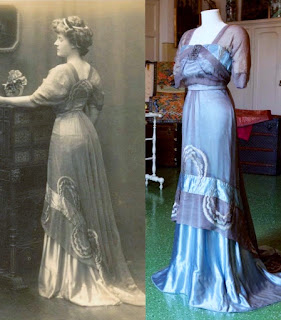 By looking at the late 1870s dress above left, one might never guess its a beautiful, vibrant red. (from Antiquedress.com)  Also note, the photo's coloring does not match the modern methods of de-saturation shown above.  Compare the photo of the 1910s gown above right to the original dress.  Its apparent the photography developing process has improved greatly in 40 years between these two examples, and different filters/exposures/techniques have been used. 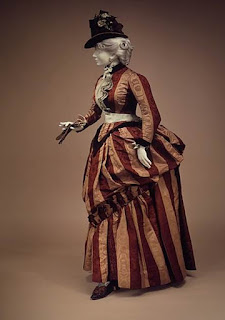 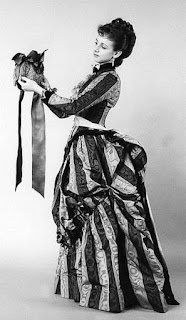 Above:  This beautiful 1888 gown from the House of Worth is kept at the Met Museum.  Would you guess this was the color combination? 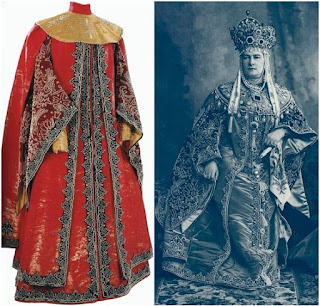 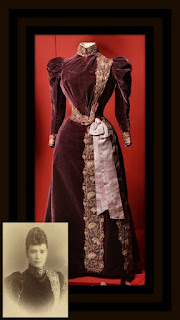 Above left:  Masquerade dress worn by the Grand Duchess Maria Pavlovna for the 1903 costume ball at the Winter Palace.  Above right:  Empress Maria Fyodorovna, designed by Charles Worth, Paris, 1890s.  Gown located at The Hermitage.

Photographers in the nineteenth century employed a wide variety of materials and processes; everything from honey to uranium found its way into one method or another.  In some cases, there is no way to tell, short of exacting scientific analysis, just what sort of variation was use to obtain a specific result.

Look at the example to the left.  Would you have thought the gown in the photograph was this deep plum color?  The following paragraphs describe the processes used to achieve this.

Now, lets listen to the experts regarding color:

Black and white film records shades of gray 'logically'. If you take a b&w picture of a blue and yellow beach ball, you expect that the blue will record dark and the yellow light. Of course. Except, it wasn't always so. If you had asked someone (before) 1900 what a photograph of a blue and yellow beach ball should look like, they would have said the blue is light and the yellow dark. Their expectation of 'correct' was based on the colorblind film in use at the time — their technological/cultural frame.

The first silver gelatin negative was straight silver bromide and gelatin — a combination sensitive only to UV and blue/violet light. The blue on the beach ball exposed well — the yellow much less so. The print of the negative reversed the values and blue became light and yellow dark.

In 1884, Josef Eder discovered that erythrosin dye caused an emulsion to become sensitive to all light except deep orange and red. Blue eyes were no longer a ghostly white, but everyone still 'knew' that a woman's lips photograph black. The emulsion was dubbed ortho-chromatic, implying its 'correct' color balance. (This was a bit of premature marketing. When emulsions added the deep orange and red bands of the spectrum, marketers had to come up with a new name — panchromatic, meaning 'all colors'.) Orthochromatic emulsions and colorblind emulsions were in use simultaneously for years. At the time, colorblind plates were more commonly referred to as 'ordinary'.

That's the bare bones, but the whole picture was amazingly complex. Different brands and types of plates and films were sensitive to different exact wavelengths of light. Between orthochromatic and panchromatic is a whole range of red sensitivities. Back in the day, a typical photographer might have worked with a half dozen different films, and a dozen different filters to further tweak the materials.  Link to awesome article 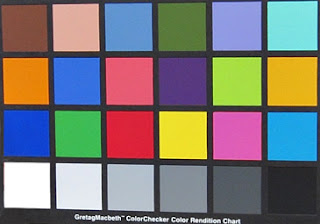 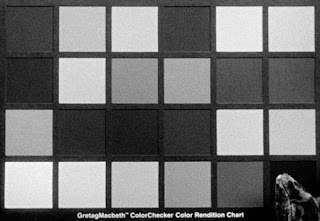 So the "colorblind", or non-filtered early photographs, would make it quite difficult for us to make out any true colors.  The above article shows us a chart of  how this colorblind photography affects colors.


Above, original colors.
Right, the colorblind translation.  Note how the  red is black, and yellow is a very dark gray color. Early photos showing a dark dress may have really been sunshine yellow!  The magenta and bright blue look off white.

As stated above, when Ortho emulsions were added, it corrected the colors quite a bit. Below are two photos, one colorblind and one with Ortho emulsions.

You can see how the colors have been corrected, especially the on the two yellow tags, which look like black tags on the left (colorblind).  The tags on the right are now closer to yellow, after using Ortho emulsions.  For further photos of color charts with different filters and emulsions, please refer to the article link above. 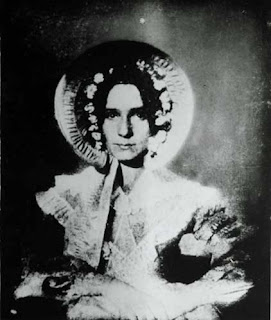 Here is a photo of Dorothy Catherine Draper, sister of NYU professor John Draper and model for the
first daguerreotype portrait of a woman in the United States in 1839. She was the first woman to be photographed with her eyes open! source


The earliest American attempts in duplicating the photographic experiments of the Frenchman Louis Daguerre occurred at NYU in 1839. John W. Draper, professor of chemistry, built his own camera and made what may be the first human portrait taken in the United States, after a 65-second exposure. The sitter, his sister Dorothy Catherine Draper, had her face powdered with flour in an early attempt to accentuate contrasts.


To me, if this was shot "colorblind" (no filter), her dress and bonnet may be any color on the above chart that corresponds with "white".  Its difficult to tell what she is holding in her arms, but I will guess maybe flowers?  The dark flower heads could be yellow or red.


For most of the first century of photography photographic plates and films were not sensitive to the whole spectrum of visible light.   The first panchromatic plate was produced in 1903, a patent obtained by Adolf Miethe and Arthur Traube for the use of the dye ethyl-red. However it wasn't until 1906, when chemist Benno Homolka discovered pinacyanol, that adequate red sensitivity was achieved.  Hermann Wilhelm Vogel created the first panchromatic plate in 1884, by use of a dye mixture he called 'azaline'; however they were "feebly sensitive, less stable, and required strong light filters to subdue the blue", so perhaps for this reason Vogel's early efforts are no longer regarded as the first.  Source

So colors were still pretty wonky (my tech term) in the early 1880s.

Finally, lets look at an article on modern photography about  using color filters on black and white photography. Another awesome link    Please read this article, they deserve the credit :)

A common problem in black and white photography is that certain colours look very similar when converted into greyscale. For example, some shades of red, green, and blue look completely different in colour, but almost identical in black and white.  This can cause objects in a black and white image to blend into one another, leaving you with a photo which is flat and lifeless, and lacking in contrast and definition.

Coloured lens filters offer a solution to this problem because they affect the way colours are "converted" to black and white. This allows you to control the way they appear in the final image, ensuring that objects are well separated and clearly defined.  There are 5 filter colours that are commonly used in black and white photography - red, orange, yellow, green, and blue. Each lets through its own colour of light and blocks other colours to varying degrees. For example, a red filter will let red light through, but block most green and blue. 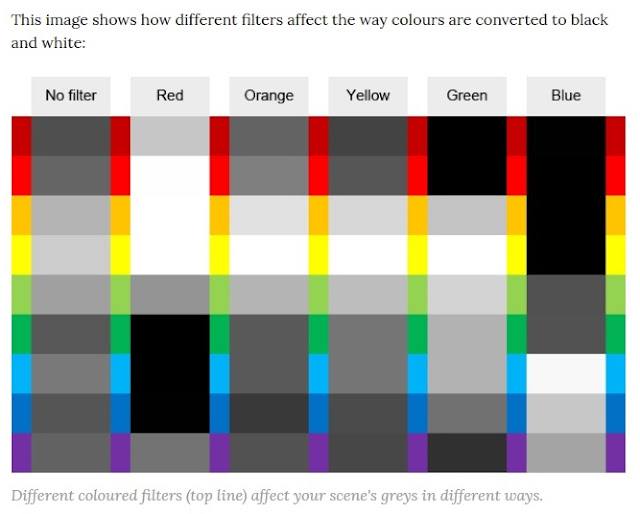 It is possible to figure out what the colors in an old photo might have been, but its a lot of work and there are so many variables:   The year the photo was taken and what developing processes were used.  Was it shot colorblind, with an emulsion of some sort, or colored filters?   Length of exposure, film type and so much more.   As for me, I will continue to guess, look at colorized photos, or search for extant gowns on line.