This portrait of a pretty young brunette lady holding a parasol can be found in the Stretching Room/Elevator of the Haunted Mansion. When the painting elongates, she is revealed to be balancing on a fraying tightrope just above the open jaws of an alligator. She is known by a few names:  The name "Sally Slater" first appeared in one of Prudence Pock's poems in the interactive queue installed at the Walt Disney World Haunted Mansion in 2011 ("Poor dear sweet Sally Slater/Was eaten by an alligator")   In her comic book incarnation, she is known as "Daisy de la Cruz".  link on her backstory. WDW cast members call her "Lillian Gracey" and say she strung her rope across to Tom Sawyer's Island from the Mansion grounds where she met her fate.

The original portrait was conceptualized by Marc Davis, and subsequent paintings were done by various artists.  "The constant motion these paintings undergo (as part of the "stretching" process) is hard on the canvas, and every couple of years a new painting may be needed. These images are repainted using guides and color keys for reference. Therefore, each new image contains the touch of the artist completing it". link   This also slightly changes the colors of Lillian/Sally/Daisy's dress, from lavender, pale pink to bright pink sleeves, and bodice colors ranging from light to dark purple, to a deep cranberry. the flowers on the skirt range from grass green to emerald green and the pattern of flower placement changes. Skirt length changes a bit. 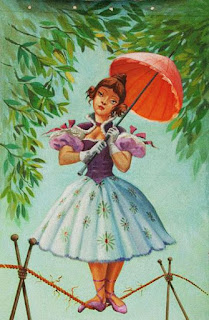 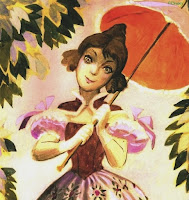 Some say she is also Miss April in the changing portrait which used to be located in the hallway, where lightning flashes and paintings change.

For my costume, I took out each element separately, and decided which version I wanted to make.  First, the skirt.  I like the offset flower pattern (left picture above), rather than the straight vertical lined flowers (seen in right picture).  I didn't want a big full skirt because the flowers on a tightly gathered skirt might get lost in the folds.

I looked in my pattern stash for a full, but only slightly gathered skirt.  It needed a bit more fullness, so when I cut out my practice pieces from an old sheet, I added 2 inches on the center front fold, giving me 4 extra inches of width.  I added 3 inches to the length.  the back pieces I also added 2 inches to each, and 3 inches in length.

Next, I had to figure out the size of the flower.  I looked at daisy stencils on line and in stores, but couldn't find the size and shape I wanted.  I finally printed out a photo of the correct flower type stencil at different sizes, and got some stencil plastic.  I would make my own.   Well, I chickened out, knowing that I am not the neatest person, and would probably make a mess using a stencil.  I decided to trace it instead.

I cut practice pieces from an old sheet.  Then I cut out a bunch of circles from newspaper the size of the flower, and began to play with placement.  The flowers were offset, and also were not in a straight line going down, but radiated out from the waist, to the curve of the skirt.  I had to space them out so the pattern met in the back correctly. Here is the rough layout before measuring and pinning in place. 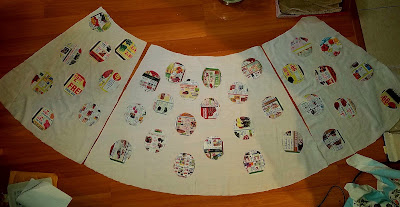 Next, I measured out the circles, and pinned them down.    I took the flower print out, slide it under the practice fabric and newspaper circle, removed the circle, and traced the flower in pen on the practice piece.  There were 36 flowers to be traced. 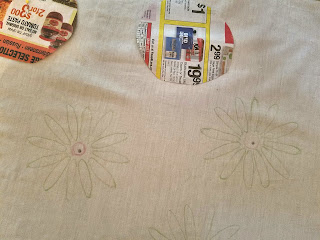 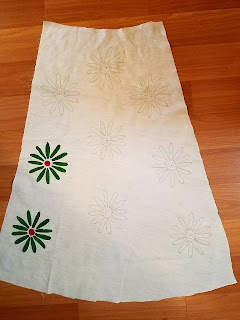 I picked a darker green paint with a deep cranberry center.  Above I am testing colors on the practice fabric.    I used fabric medium and mixed with the paint, and started painting on the actual skirt fabric. This makes it softer and washable.  Iron it to heat set. 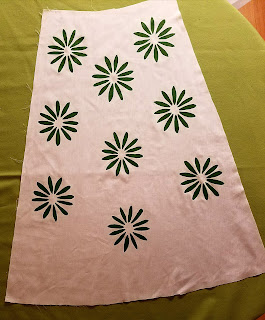 Each of the 36 flowers took about 20 minutes - two coats on each petal and center.    So about 12 hours total to paint the skirt. 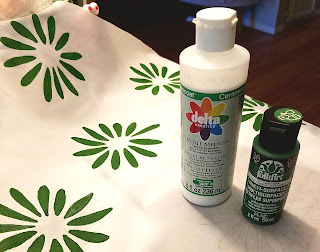 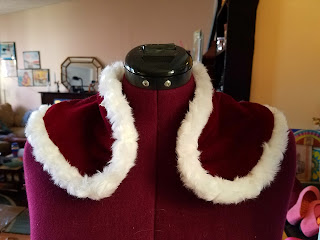 I let the flowers dry for a few days before adding the centers.

In the meantime, I made a simple little capelet.  I cut a "C" shape from cranberry cotton and the velvet.  I sandwiched white fur trim between the two layers. 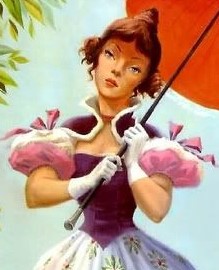 For the bodice, I used Simplicity pattern 2832 which I had in my stash for a costume I made for a play.  I used the version with the short, puffed sleeves.  I cut out the cranberry velvet (my favorite color of all the painting bodices) and lining pieces, and sewed them up.  For the puffed sleeves, I used pink cotton with tiny white dots.  After cutting them out, I flat lined them with a few layers of tulle.  For the white pieces on top of the sleeves, I used white dotted Swiss. 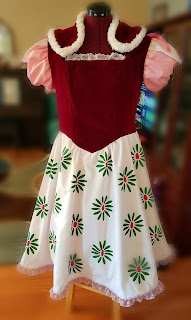 I put some white lace across the top of the bodice, and some lavender lace around the hem.   In the photo left, I still have some tweaking to do here and there.  I have a light crinoline under the skirt.  I may switch to my fuller one.  (I wish I had an 18 inch waist like the portrait).

I bought some inexpensive flat shoes and ribbon to match.  I will tie the ribbon around my ankles ballet style.  I had to work the alligator in somehow.   I would be carrying a parasol and didn't want to carry a stuffed animal around too.  Then I needed a purse.  I had a bright green purse with a bamboo handle, so I pinned the alligator to the outside of my purse!  I  had a plain pink nylon parasol, so I just sewed some drippy lace around the edge. 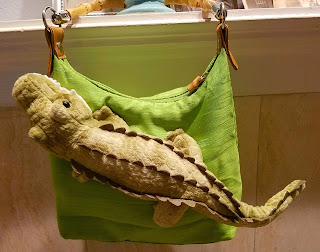 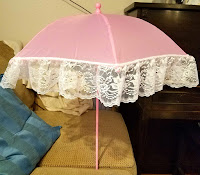 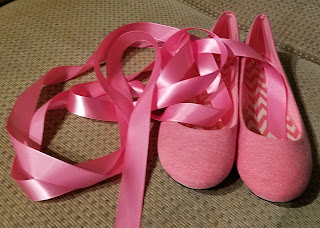 The hair was a problem for me.  First, I tried to use my own hair, but its too thin in front to make the side rolls.  I dug out a few of my wigs.  One was a full, curly wig that refused to do what I wanted.  The other was more of a pony tail piece.  I made a bun out of it, thinking I could put it on my own hair.  Didn't work.  Party City wanted $30 for a cheap, thin, shiny wig that showed the cap. 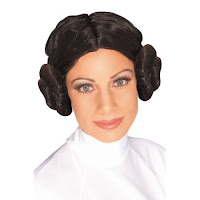 I would have to order something. It was less than a week to Comic Con, so I jumped on Amazon with 1 day shipping.  Bingo!   I came across an adult Princess Leia wig that I could work with. It already has side rolls, and I could use the pony tail piece to make a bun and attach it on the top.  I ordered it, and when I got it, I was mad!  Want to see why? I GOT A PAIR OF HAIRY MICKEY MOUSE EARS!  The wig is horrible.  The center part is not in the center, the side buns are at my temples.  I can't fit my hair in it, and the back edge ends at the middle of my head.  It would fit a child.  Back to square one. 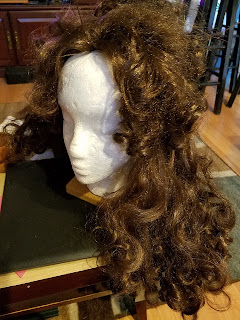 I was running out of time, so I brought out the crazy matted curly wig I had found earlier.  I had to make it work.


I played with it for about an hour, and finally tamed it enough to get something half way decent.

First, I put the bun on the top.  I like the way some curls fell around my face, as I don't look good with my hair all pulled back.  Next, I parted it down the middle and made a pony tail on each side.   Trying to keep it from curling back up was very difficult.  I rolled the side buns, and left some curls out to soften the hairline.   When I finished, I put hair nets over the bun and side rolls, and sprayed the heck out of it. 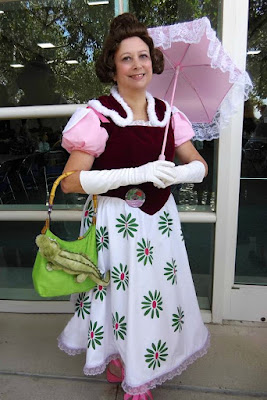 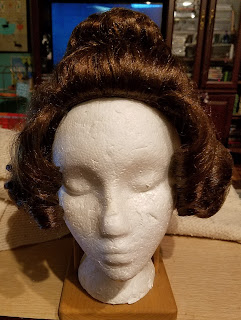 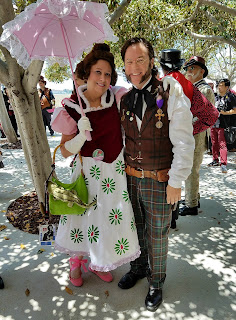 My first event was Comic Con.  I was pleased that so many people recognized my character!  One young man was excited to take a photo with me, and showed me his full arm tattoo of Lillian Gracey.  Two people had phone cases with her on it, and wanted photos.  Some people stopped me and knew they had seen me before but could quite place it, until I mentioned Haunted Mansion.  Then it clicked.  A few people called me April or Lillian or Daisy.

Here are a few shots.  Unfortunately, I lost my ribbon choker on the shuttle bus to the Con. The button near my waist is the portrait, and the saying "Welcome Foolish Mortals".  It was my hint for people trying to guess who I was.

Left, my friend Trip.   Below, lovely Birda as Belle. 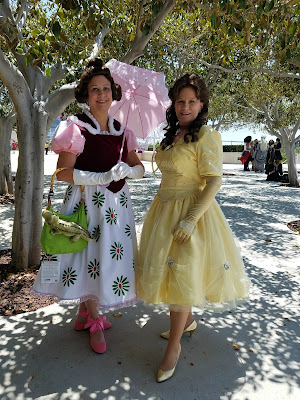 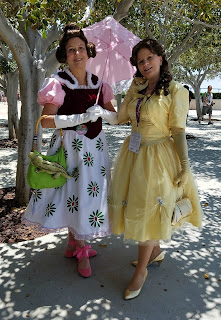 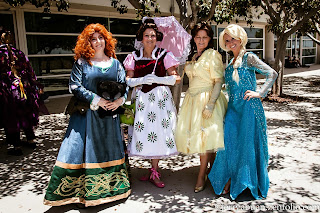 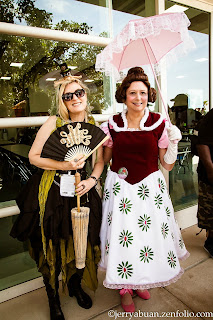 Left, my friend Ramona.  Above, Disney ladies Merida, me, Belle and Elsa.

Sorry, these photos were taken with my cellphone in the dark.  I had my ribbon choker this time -  but forgot to pack my white gloves!   I wore my light pink ones instead. 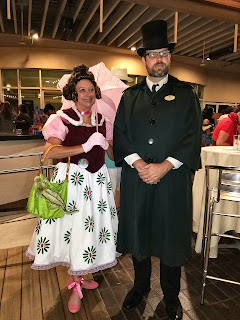 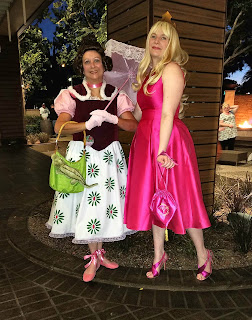 Above, Chris, the "Ghost Host" and Vanessa, Princess Aurora 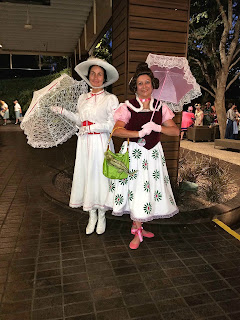 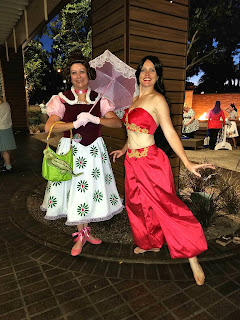