Alice and Dorothy on Stage and Screen - Part One

One saying that is a favorite among costumers is "I fell down the rabbit hole", when researching a project online.   Well, I literally fell down that hole for this post.  While surfing YouTube for early 20th century film footage, I came across a beautiful silent version of Alice in Wonderland.

Wondering if there were other vintage Alice films, that rabbit hole lured me in deeper.  Not only did I find multiple Alice movies, but suddenly up popped Dorothy Gale in silent film. I am excited to see that these films are still available 100 + years later.

This will be a two part post.  One for Miss Alice and one for Miss Dorothy.  Let's start with Alice. I am not including any animated versions below (we all know the Disney one!)

Charles L. Dodgson, who wrote as Lewis Carroll, published Alice's Adventures in Wonderland in 1865, followed in 1871 by Through the Looking Glass and What Alice Found There.  John Tenniel illustrated both.

The earliest photo I found of Alice on stage was this 1898 production  at the Opera Comique Theatre in London.  Rosa Hersee as Alice and Arthur Elliot as the Hatter.  Getty Images.  Below, Right

Below Left, we have this lovely photo of  the Mad Hatter's tea party, a scene from a theatre production of “Alice In Wonderland”. (Photo by Hulton Archive/Getty Images). Circa 1910 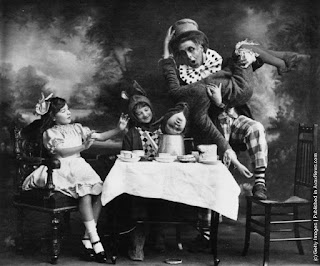 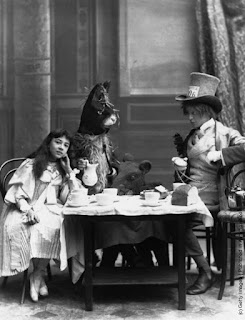 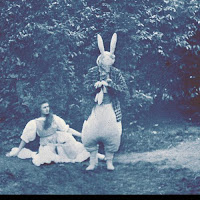 In 1903, the very first film version of Alice was made.  Starring eighteen year old May Clark as Alice, this film has wonderful special effects from the time period.   Here is the link so you may watch this delightful film 1903 Silent Film

May was quite the pioneer:  She went on and worked as a camera operator, carpenter, cinematographer, co-producer, company executive, costume designer, set decorator and in special effects.  She died in 1971 at the age of eighty six. 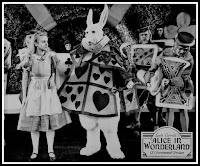 In 1915, we have the second film about Alice.  Sixteen year old Viola Savoy played the lead. "This film version is notable for depicting much of the Father William poem, and it includes footage resembling Tenniel's illustration of Father William doing his back-somersault at the front door" (wiki)  The entire silent film can be watched here 1915 silent version

1923-1927 brought us Walt Disney and his Alice comedies, short (about 8 -10 minutes) animated films with live action Alice and her adventures.  Adorable  five year old Virginia Davis was the first Alice, who was in 15 shorts, followed by three other actresses, for a total of 57 films.  The first film is the only one named Wonderland, and it certainly isn't about the adventures we are familiar with.   Watch this quick film.  Alice Short 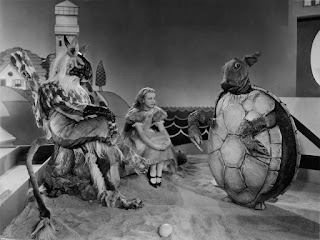 My absolute FAVORITE Alice move is 1933's version.   Lovely nineteen year old Charlotte Henry stars in this one, along with other big name actors such as Gary Cooper as the White Knight, W.C.Fields as Humpty Dumpty, Cary Grant as the Mock Turtle and Edna Mae Oliver as the Red Queen. All I could find was a lengthy trailer, watch it Here   and a dubbed over version in, I think, Russian (talking over the English) if you want to watch Russian dubbed version


In my own opinion, the WORST Alice is 1931's version. It is the first talkie, but the acting is atrocious (and her wig is awful). Nineteen year old Ruth Gilbert plays Alice, and acts like a petulant child. I will let you watch and decide :)   1931 Talkie 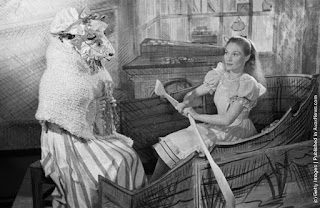 Above, A nice stage performance at the Scala Theatre, London. Alice, played by actress Roma Beaumont, in a scene from “Through The Looking Glass”, where the Sheep, played by Phyllis Morris gives Alice a pair of knitting needles and they turn into oars in her hand. (Photo by Kurt Hutton/Picture Post/Getty Images). 15th January 1944   Roma was about 31 years old at the time.

1949 brought us a beautiful color version starring a very pretty twenty year old, Carol Marsh.  “All of the other live actors in the film are seen only in the live action scenes.  However, they lend their voices to the Wonderland characters, and the staging of the scenes in England vs. the scenes in Wonderland is reminiscent of the Kansas scenes vs. the OZ scenes in The Wizard of Oz, in that several of the live action characters seem to have counterparts (of sorts) in Wonderland.  The film was kept out of Britain because the representation of the Queen of Hearts was seen as too close and too unkind to Queen Victoria” 1949 Movie 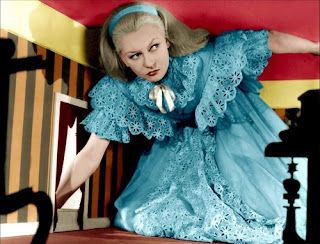 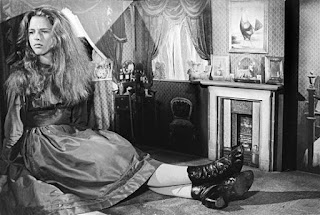 In 1966, BBC did a televised play starring thirteen year old Anne-Marie Mallik.  It also starred Peter Sellers as the King of Hearts, and John Gielgud as the Mock Turtle.  "Director Jonathan Miller's production is unique among live-action Alice films in that he consciously avoided the standard costume design and "florid" production values. Most of the Wonderland characters are played by actors in standard Victorian dress, with a real cat used to represent the Cheshire Cat. Miller justified his approach as an attempt to return to what he perceived as the essence of the story: "Once you take the animal heads off, you begin to see what it's all about. A small child, surrounded by hurrying, worried people, thinking 'Is that what being grown up is like?"  Wikipedia.    A very artsy movie, with haunting music by Ravi Shankar. Listen 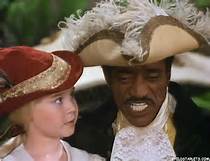 My daughter's and my favorite modern Alice is the 1985 mini series that combines Wonderland and Through the Looking Glass.  It stars ten year old adorable Natalie Gregory and a huge, all star cast, including,  Red Buttons, Sammy Davis Jr.(Caterpillar), Shelley Winters, Telly Savalas (Cheshire Cat) , Roddy McDowell, Ringo Starr, Carol Channing and a dozen more.  This movie is worth watching just for the tap dance number between Natalie and Sammy Davis Jr. to "You Are Old, Father William"  watch em dance 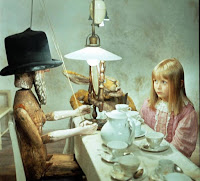 Alice is a 1988 fantasy film written and directed by Jan Švankmajer. Its original Czech title is Něco z Alenky, which means "Something from Alice"    This is the STRANGEST Alice I have ever seen!  Watch a short clip of how Alice falls into the "rabbit hole"  creepy fall

That is all I am going to post on Alice, although there are several more, including the newest ones with  Mia Wasikowska 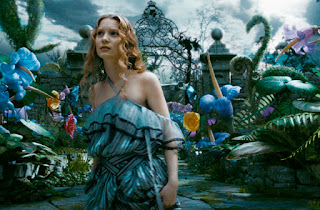 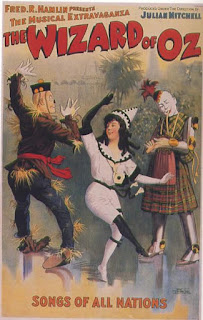