The House of Lucile

I have a small collection of vintage postcards of stage actresses and entertainers.  Two of my favorite ladies in my collection are dancer Irene Castle, and actress Lily Elsie.  Both ladies were at the top of their game, innovative and clothed in the lightest, airiest, delicate gowns of their time.  They had one thing in common.  The were dressed by the House of Lucile, created by Lady Duff Gordon. 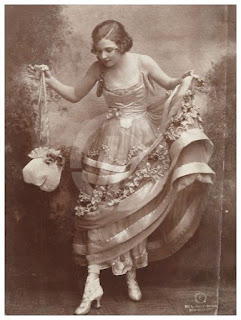 "Vernon and Irene Castle were a husband-and-wife team of ballroom dancers and dance teachers who appeared on Broadway and in silent films early in the early 20th century. They are credited with reviving the popularity of modern dancing.  Irene Castle became a major fashion trendsetter, initiating the vogue for shorter, fuller skirts and loose, elasticized corsets.  She is also credited with introducing American women in 1913 or 1914 to the bob – the short, boyish hairstyle favored by flappers in the 1920s.  The elegant, yet simple, flowing gowns Irene wore on stage and screen were regularly featured in Vogue, Harper's Bazaar  and other fashion magazines. These were often supplied by the famous couturier Lucile."   source
Irene, costumed by Lucile for "Watch Your Step" 1914 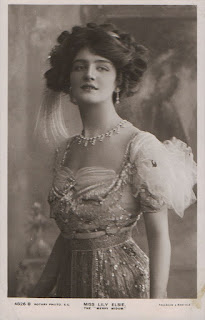 Lily Elsie began as a child star in the 1890s, and built her reputation in several successful Edwardian musical comedies before her great success in The Merry Widow, opening in 1907. Afterwards, she starred in several more successful operettas and musicals. Admired for her beauty and charm on stage, Elsie became one of the most photographed women of Edwardian times.  Lucile designed the costumes for Elsie in The Merry Widow and thereafter used Elsie to promote her fashions, designing her personal clothes and costumes for several of her other shows."   source
Lily Elsie costumed by Lucile for "The Merry Widow" 1907
Lucile's memoirs on Lily Else can be read here 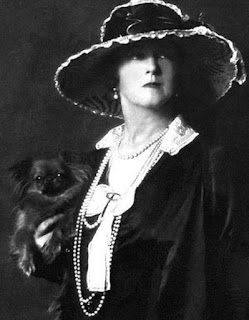 Lucy Christiana, Lady Duff-Gordon, was a leading British fashion designer in the late 19th and early 20th centuries, best known as "Lucile", her professional name. Apart from originating the "mannequin parade", a precursor to the modern fashion show, and training the first professional models, she launched liberating slit skirts and low necklines, popularized less restrictive corsets and promoted alluring and pared-down lingerie.     Photo by Arnold Genthe, 1919  In order to support herself and her daughter after the end of her first marriage, Lucy began working as a dressmaker from home. In 1893 she opened Maison Lucile, and ran a house for 20 years in London.  The business expanded to New York, Paris and Chicago, famous for her lingerie, tea gowns and evening wear.  She is also widely credited with staging the first runway or catwalk style shows. These affairs were theatrically inspired, invitation-only, tea-time presentations, complete with a stage, curtains, mood-setting lighting, music from a string band, souvenir gifts and programmes. Another innovation in the presentation of her collections was what she called her "emotional gowns." These dresses were given descriptive names, influenced by literature, history, popular culture.    source 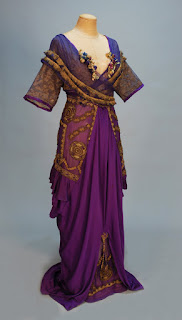 Left- 1911 Gown Whitaker Auctions
Her gowns were named to evoke a mood:  "The Harvest of Sin", "The Shadow of Scandal", "Why do you Hesitate?" etc. were used for one collection.  Her tea gowns were called stagey and sexually suggestive, to which she replied she "had no use for dull, stiff boned bodiced brigade."   “Red Mouth of a Venomous Flower” and “Incessant Soft Desire.” are other suggestive names.  Other, simpler names were Violette, Sammie and Monique.

Lucille first visited the United States in 1907 and opened her New York house of couture in 1910.   She presented her mannequins (models) in a manner similar to stage actresses,  perfecting the "fashion show" and had the models waiting at the end of the show, similar to actors after a play. She taught them mannerisms to use to showcase the fashions in the best way possible.   "Her first New York fashion show in 1910 drew such crowds, that one article stated 'No play at the theaters ever attracted such a crowd at that which came daily to the house of Lucile'.   Lucile recognized that seeing garments on a moving body had  a considerable  effect on sales and that fashion shows helped clients to visualize themselves in dresses."   Hollywood Before Glamour: Fashion in American Silent Film by Michelle Tolini Finamore 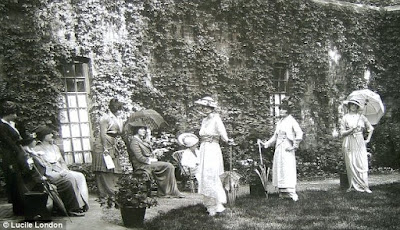 One unfortunate claim to fame was being a survivor, along with her husband Sir Cosmo Duff, of the sinking of the Titanic.  Unfortunately they came under disapproval, as they were in the lifeboat with only 12 passengers, and were thought to have bribed the crew not to return and pick up further survivors, for fear of being swamped.  They were called to testify at the Board of Inquiry.  Although exonerated, Sir Cosmo felt he couldn't live down the shame; however, Lucile continued on with the business. 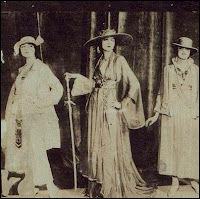 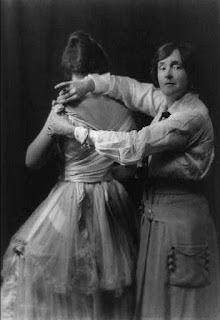 "She staffed some 2,000 employees worldwide, grossing a personal income of nearly $400,000 a year by 1912 and over $2,000,000 by 1918. Lucile instituted delicately fluttering and feminine ingenue-inspired gowns, based on fluffy, rococo lines and conceived in diaphanous, soft materials. Hallmarks of her delicate art included billowy sleeves, scalloped hemlines, obi-like sashes, and garlands of the finest and tiniest silk-ribbon rosettes as trimmings. But the coveted "Lucile" look was most accurately defined in her artful use of subtly blended colors -silvery pink, orchid-peach, turquoise over gold, palest lemon and spring green, faded rose with French blue. 'Color has almost been my religion," Lucile confessed, "for I see all beauty in terms of it.''"  source

Pink faille trimmed in blue and lilac satin, having appliqued self fabric lilies of the valley gathered into bow-form mechlin lace insertions edged in metallic thread, sleeveless bodice over long sleeve chiffon under-bodice, having lace neck insert decorated with silk flowers, open skirt having a serpentine band of furbelows, tulle underskirt inset with lace bows over a silk and chiffon underskirt with a cluster of silk flowers. 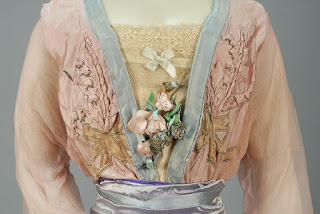 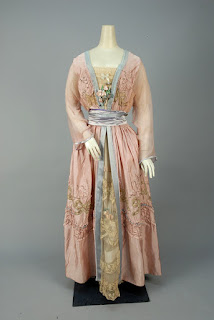 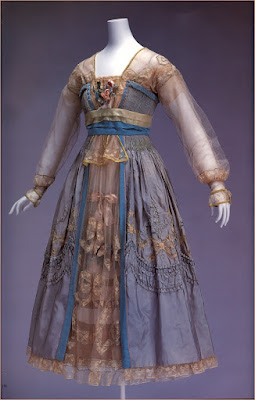 One of my very favorites was found on the FIDM blog.  You can read about this gorgeous circa 1917 dress  in more detail  here 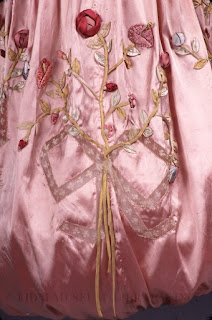 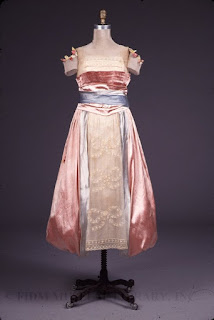 "Though Lucile was concerned with making her clients look their best, she was also deeply entranced by the materials of her profession. Lucile felt "a positive intoxication in taking yards of shimmering silks, laces as airy as gossamer and lengths of ribbons, delicate and rainbow-colored, and fashioning of them garments so lovely they might have been worn by some princess in a fairly-tale." Lucile was also sensitive to color, taking great care to carefully layer and blend fabric and trim of different colors to give a pleasing impression. In Lucile's design vocabulary, green signified renewal and hope, blue for purity, yellow for luck and rose for love and romance."

Sears, Roebuck & Co.
"In 1916, Lucile pioneered the first diffusion line, partnering with Sears, Roebuck & Co. to create mail order versions of her designs, making her the first couturière to launch a ready-to-wear line. At the time of their creation they retailed for anywhere from $25 to $45, which adjusted for inflation today would be approximately $500 to $900." Below are pages from a 1917 catalog, courtesy of this website Link 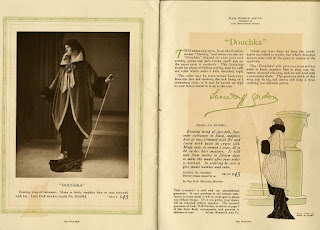 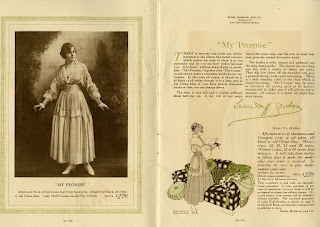 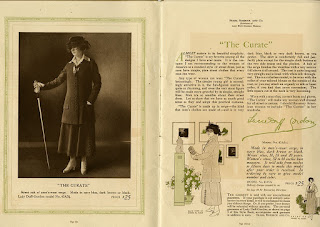 Sketches.   Lucy was quite an artist, and did a lot of the main concept art for House of Lucile.  However, she did employ at least one sketch artist to record her designs for in-house use. "As demands grew on the designer's time, especially in the United States during World War I, Lucy was aided by sketch artists who created ideas based on the "Lucile look". In her memoir, the designer credited her corps of assistants for their contributions to the success of the New York branch of Lucile Ltd. Many of these assistants' drawings were published in the press and signed "Lucile", though occasionally the signature of the artist, such as Molyneux, appeared. It was general practice for couture houses to use professional artists to execute drawings of designs as they were being created, as well as of the artist's own ideas for each season's output and for individual clients. These drawings were overseen by Lucile, who often critiqued them, adding notes, instructions, dates, and sometimes her own signature or initials, indicating she approved the design."   Wikipedia 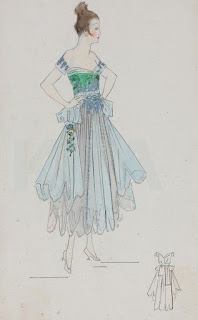 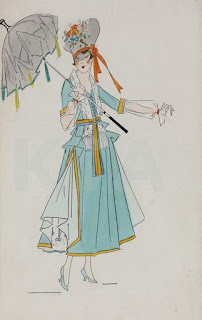 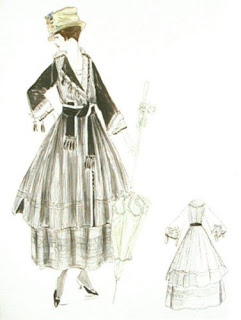 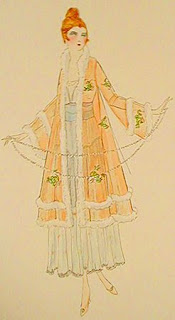 "How she presented herself went a long way in the business, the whole idea that she was aristocratic allowed her to be so suggestive,’ said Beth Dincuff, a fashion history professor at Parsons, The New School for Design. It also paved her foray into the lingerie industry. While Lady Duff-Gordon did not reinvent lingerie garments, she did revolutionize underpinnings by ushering them into the decorative arena. Her undergarments were sold out of a boudoir named The Rose Room, an environment where women were meant to feel comfortable shopping for lingerie with risqué style names like 'Dawn's Gentle Whisper'. She also named her ready-to-wear designs with monikers like ‘Climax’ and ‘The Garden of Love’." Source

A model posing on the Rose Room mini-stage, wearing an intimate tea-gown and bed jacket 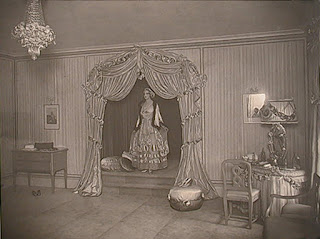 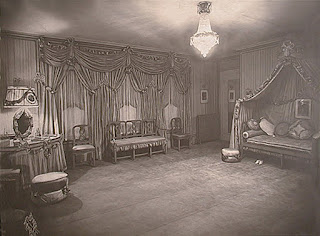 "Rose Room" in the Chicago house of Lucile, where the designer’s famous lingerie was displayed
encyclopedia-titanica.org

"Each of her houses had a Rose Room, complete with an elaborate daybed, with a silk canopy trimmed in silk flowers. By placing the daybed in the Rose Room, where filmy lingerie, nightwear and other exotic underpinnings were sold, the boudoir mood and scene were set.  The surveying and purchasing of underclothes, normally a private matter, was thus acted out in the faux private space of the bedroom."  Performance, Fashion and the Modern Interior: From the Victorians to Today By Fiona Fisher, Patricia Lara-Betancourt, Trevor Keeble, Brenda Martin

For Lady Duff Gordon, her night gowns and lingerie reflected female intimacy and allowed a “glimpse into a woman’s soul.” The Queen of Spain famously owned some of Lady Duff Gordon’s most beautifully created pieces, the Duchess of Warwick requested black silk negligee’s to match her boudoir drapes and an exclusive ‘Lucile Trousseau’ was designed for Queen Victoria’s granddaughter, Princess Margaret ‘Daisy’ of Connaught.  source

Despite Lucile's great success as a couturier, by 1923 she no longer had any stake or involvement with Lucile Ltd. Due mainly to mismanagement, the four branches gradually closed, though the Paris branch stayed open until the mid-1930s under the guidance of Lucile's former assistant. Until her death in 1935, Lucile capitalized on her former reputation by writing fashion columns and her autobiography, Discretions & Indiscretions.