“That’s not period”.   Those three words can deflate someone in seconds, especially a new costumer.  It has happened to me, and probably at some time or another, to you.   A few months ago in a social media costuming group, a new costumer proudly posted a picture of herself in her first period costume. She was beautiful, and we all told her so until someone posted those three words.

The woman had lovely tattooed arms, works of art.  The poster went on to say “If you covered your tattoos, you would look so much better” Of course, we all jumped to her defense but the insult lingered.

Yes, tattoos on women ARE period. 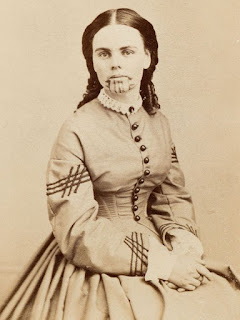 One of the first white tattooed women in America (not by choice) was Olive Oatman.  In the 1851 she and her sister were captured by Southwest Indians after their family was killed, who then sold the sisters to the Mohave Indians, who adopted and raised them.  They were given blue tribal tattoos on their chins.  Her sister died of hunger during their captivity.  In 1858 when Olive was ransomed back at age 19, she became a celebrity.  She made the circuit, telling tales of her time in captivity.  The mining town of Oatman, Arizona, is named for her.

"The upper classes were obsessed with maintaining their status and individuality. This meant they must be different from the other classes and "better" in more than one way. Tattooing arose as a way for the wealthy to differentiate themselves from the other classes. One could instantly see the difference between a tattoo done by the famed Professor Riley and some other tattooist  Thus, if someone was to pose as a member of a higher class at a party and tattoo showing ensued which often did, the impostor would be found out."
Tess Goodwin, researcher

When the Prince of Wales got a tattoo of a cross in Jerusalem during his Grand Tour in the 1860s, he was making a religious statement. But when his sons followed, having the tattoos copied and adding some of their own, a fad was born. Suddenly tattoos were popping up all over royals, from Czar Nicholas II to Kaiser Wilhelm. And at some point aristocratic women took the plunge, too.

"Eager to decorate themselves with rare and unique designs, rich women took to the needle. Inscribed on wealthy bodies, these decorations were not for public consumption. In fact, the ways in which the aristocracy concealed their tattoos were as ingenious as the tattoos themselves."
Erin Blakemore, historian

Lady Jennie Randolf Churchill (Winston Churchill's mother) had a tattoo of a snake eating its own tail on her wrist which was a symbol of eternity.  Supposedly, she had a special diamond bracelet crafted to cover it up when she had to. She got the tattoo like “many other Londoners, in honor of the coronation of King Edward VII whose reign ushered in a new opulence and signaled the end of Victorian conservatism."

Lady Randolf was part of the Prince of Wales’(Queen Victoria’s son)  social group and a close confidante of the man who would become King Edward VII. Their set had a fondness for fast living and tattoos.

The book "Young Titan: the Making of Winston Churchill" by Michael Shelden reads:

“From The New York Times dated September 30, 1906: An elaborate tattoo mark on her left wrist is concealed by a broad bracelet that she always wears in evening dress, and few know of its presence.”  The tattoo was supposedly done by Tom Riley, the finest tattoo artist of his time.  The tattoo wasn’t easy to spot.
A more sensationalized account reads:
"There are certain women of the world who capture public attention to that degree that everything they do is promptly chronicled. Lady Randolph Churchill is one of them. When returning home from India with Lord Randolph she noticed a British soldier tattooing a deckhand… She had the artist brought before her and asked him for some designs. He suggested the Talmudic symbol of eternity- a snake holding its tail in its mouth. Lady Randolph was charmed and bared her arm for the operation. Lord Randolph swore and protested. But the tattooing was done- so it is said, at least- and it is described as a beautifully executed snake, dark blue in color, with green eyes and red jaws. As a general thing it is hidden from the vulgar gaze by a broad gold bracelet, but her personal friends are privileged to see it and hear the story of the tattooing.”    San Francisco Call  November 26, 1894

A rumor I kept coming across online is that Queen Victoria herself had a tattoo of a tiger fighting a python, but I don’t know that I believe that one!  Queen Olga of Greece (1851-1926) is said to have had a tattoo.  Catherine the Great (1729-1796) is also reported to have had one.

Margot Mifflin "Bodies of Subversion: A Secret History of Women and Tattoo" writes:
“They (tattoos) were first documented among the upper classes in England and subsequently in the US., and they were considered a fashion trend. Women got their legs and arms tattooed with the names of their husbands or with decorative designs that functioned like jewelry. The trend subsided and around the turn of the century, partly because circus women started appearing in the 1880s, and the practice quickly became associated with lower class women. That bias remained for a good century, exacerbated by other factors like tattooing’s association with the military and some of the raunchy imagery that surfaced there.”

Erin Blakemore, Historian writes:
“The 1880s also marked the arrival of tattooed ladies to the already-active circus and carnival scene in the United States and Britain. These women challenged sexual norms by lifting their skirts to reveal hundreds of tattoos, but tattooed ladies were also noteworthy for their ladylike ways. Nora Hildebrandt was the first of the famous tattooed ladies, touring the United States with P.T. Barnum and serving up sexual titillation tamped down by hints of rape at the hands of the fictitious Indian captors who “forced” her to receive over 300 tattoos. In reality, she was the daughter of a tattoo artist.” 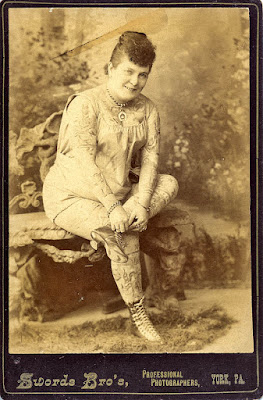 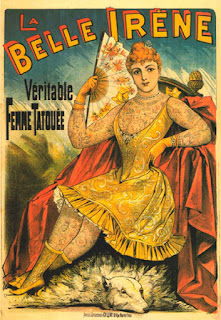 In the 1880s, tattooed women arrived in traveling shows and upstaged the men completely.  This was because they had to show their legs and thighs, which was quite racy.  Tattooed women left their face, neck and hands untouched so they could appear modest while clothed.

“Female tattooed attractions told outrageous stories how they acquired their tattoos.  Irene “La Belle” Woodward, the first tattooed lady in 1882, said her tattoos were required protection that she needed in the Wild West of Texas to escape the hostile intentions of the Red Indians.”
"Bodies of Inscription" by Margo Demello.

Why were people so interested in seeing tattooed women on stage back in the day?

“There's a sexualization to it because a lot of women were wearing skimpy outfits on stage and showcasing skin with personal markings on them. Unless you were someone who was regularly going to vaudeville shows or brothels, part of the appeal was that you'd be seeing women with body modification who you wouldn't see on the street. It was exciting to see a scantily clad body on stage. It was acceptable for men to have tattoos on their bodies, but they'd be viewed as lower class. It was still shocking to see a man with tattoos, but even more shocking to see a woman with tattoos.”
Anni Irish, MA in "Gender and Cultural Studies" 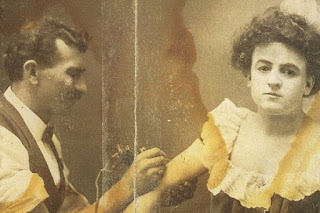 Maud Stevens Wagner (February 1877 – January 30, 1961) was a circus performer and the first known female tattoo artist in the United States.  She was an aerialist and contortionist, working in numerous traveling circuses. At the World’s Fair in 1904 she met her husband, a tattoo artist, from whom she learned the art, and became a living canvas for him.  Maud before; below Maud after. 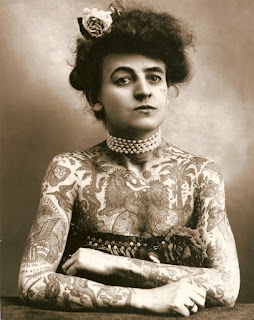 Tattooed women continued to be a curiosity into the 1920s and 1930s.  Here are some striking photos. 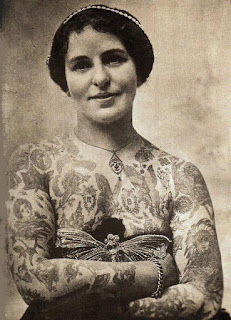 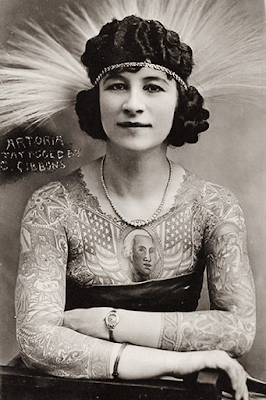 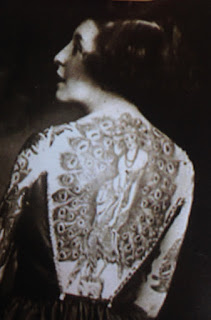 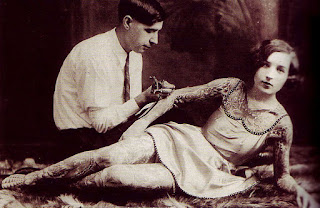 
Women and tattoos have had a place in history for over 150 years.  Wear them with pride.