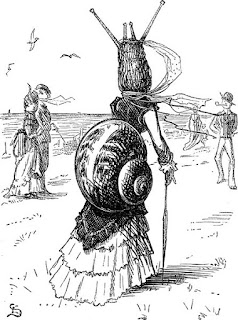 Off and on over time, I have seen a cartoon floating around that makes me laugh.  Its a Punch Magazine 1870 satirical cartoon showing a woman/snail with her shell as a bustle, by artist Linley Sambourne.  I love how the others on the beach stop to stare at this fashionable creature.

I have known about the Punch cartoons for years, but never really looked into them until recently.   I found their website, and was amazed at all the great satire from 100-150 years ago, not only about Fashion, but on Domestic & Foreign Affairs, Culture, Art, Society, and Science & Technology.  Punch Magazine ran from 1841 through 2002. 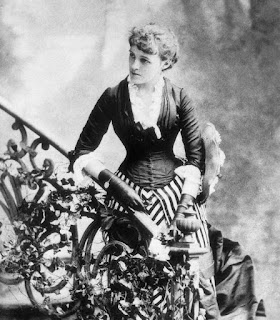 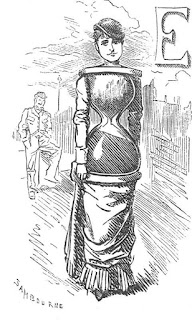 The Hourglass Lady.   Another cartoon by Linley Sambourne drawn in 1877, shows a woman with the new form fitting silhouette.  The photo on the right is Author Edith Wharton, circa 1877. 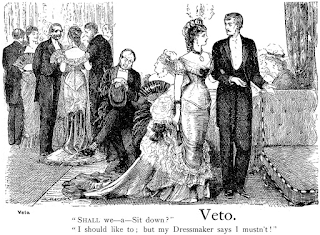 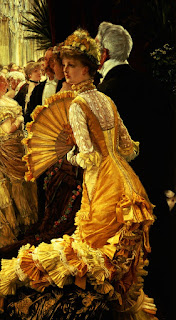 Veto.   "Shall we - a - sit down?" "I'd like to; but my dressmaker says I musn't!"    Drawn by George DuMauier in the late 1870s.  This reminds me so much of the beautiful gowns painted by James Tissot of the same era.

"The Chatelaine: A Really Useful Present" Cartoon from Punch, 1849 By John Leech 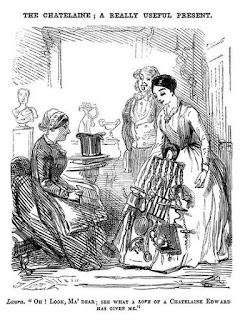 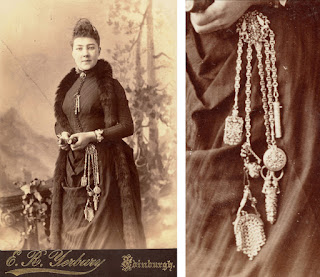 Copy reads "Oh, look! Ma' dear;  see what a love of a chatelaine Edward has given me."   A chatelaine is a decorative belt hook or clasp worn at the waist with a series of chains suspended from it. Each chain is mounted with useful household appendages such as scissors, thimbles, watches, keys, vinaigrette, and household seals. 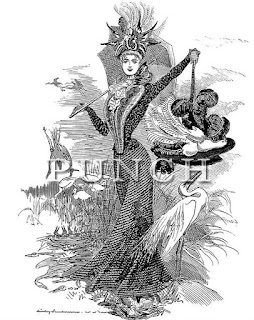 The "Extinction" of Species, or "the fashion plate lady without mercy and the egrets."   At the turn of the 20th century, thousands of birds were being killed in order to provide feathers to decorate women's hats. The fashion craze, which began in the 1870s, became so widespread that by 1886 birds were being killed for the millinery trade at a rate of five million a year; many species faced extinction as a result.  The most popular plumes came from various species of egret, known as "little snowies" for their snowy-white feathers; even more prized were the "nuptial plumes", grown during the mating season and displayed by birds during courtship. On March 14, 1903, President Roosevelt established Pelican Island as the first national wildlife refuge in the United States to protect egrets and other birds from extinction by plume hunters. Source 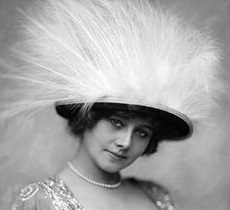 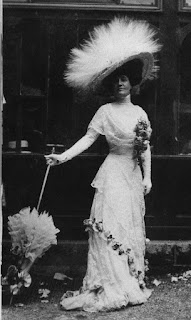 Mr. Punch's Designs after Nature.  'This little duck wear and effective aquatic jacket, strongly recommended for the boating season'. Drawn in 1868.    Similar to the above, the use of whole birds on hats contributed greatly to the endangerment of some species. 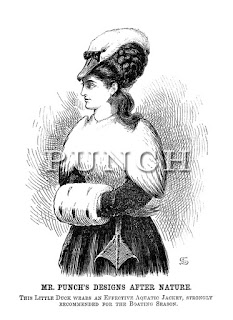 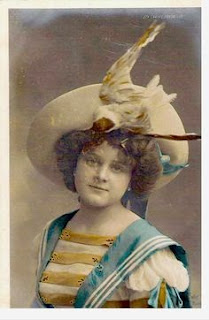 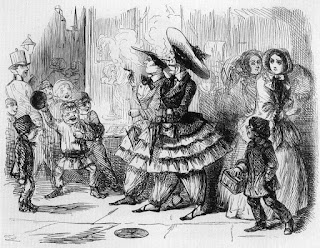 "Bloomerism – an American custom", 1851. Some American women appeared in the streets of London in a tunic and trousers, confirming a certain brassy stereotype. The feminist "bloomer" attire received much ridicule in the mid-19th century. This cartoon seeks to associate it with women smoking, which was considered completely unfeminine during the Victorian period.    Wiki

I couldn't find a photo of a woman both in bloomers and smoking, so here is one of each! 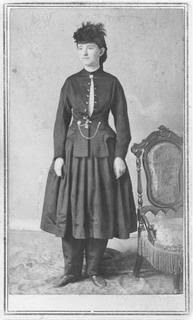 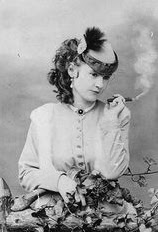 This one is definitely a favorite of mine.  First, the gentleman looks like Jack Skellington from Nightmare Before Christmas.  Second, the title intrigued me.  This from 1861 is called The Arsenic Waltz  "The new dance of death. (Dedicated to the green wreath and dress-mongers)"  What the heck does that mean? 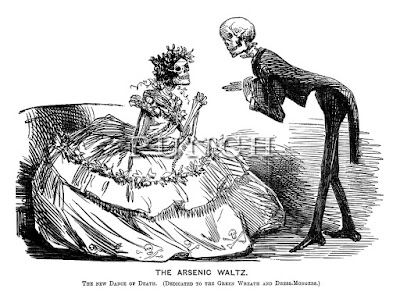 After a little research, I found a reference to the "dangers of Scheele's green dye."  I came across a book titled "Fashion Victims:  the Dangers of Dress Past and Present"  by Alison Matthew David.  Arsenic was used in the textile business to achieve a vibrant green color.  A forensic expert in poisoning used for trials stated that  "if women carried ammonia instead of the usual scent bottle, the mere touch of the wet stopper on the suspicious green would betray the arsenic poison and settle the business immediately".  "If it turns blue, copper is present, and copper is rarely, if ever, present in these fabrics without arsenic also being present - the green being arsenite of copper."  As to the "green wreath" reference, handmade floral hairpieces were very popular.  They "celebrated these flowers as decidedly the most becoming articles for ornamenting the hair".  Comeliness was secured at great loss to their makers.  They produced cloth and paper flowers to replace natural flowers.  The green colors were powders ground up to achieve the color needed - made of the same arsenic.  All the powder in the air was breathed in, causing poisoning.   The "Scheele" refers to Swedish chemist Carl Wilhelm Scheele, who invented the color in 1775. Despite evidence of its toxicity, it was used in sweets for food coloring.  Later on, Scheele's Green was used as an insecticide in the 1930s.


To finish this post, I present these fun crinoline cartoons: 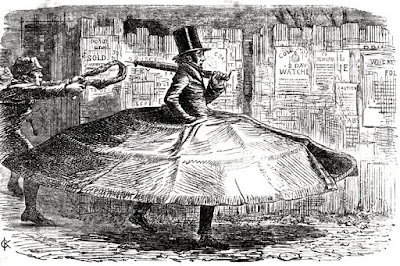 "Mr. Tremble borrows a hint from his wife's crinoline, and invents what he calls his "Patent Anti-Garotte Overcoat," which places him completely out of harm's reach in his walks home from the city." 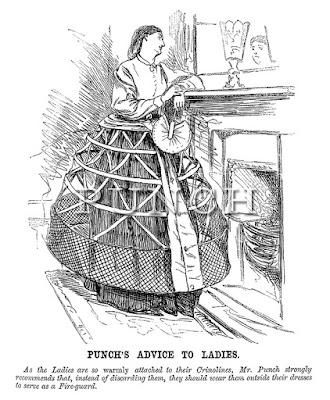 "As the ladies are so WARMLY attached to their Crinolines, Mr Punch strongly recommends that, instead of discarding them, they should wear them outside their dresses to serve as a Fire-guard." 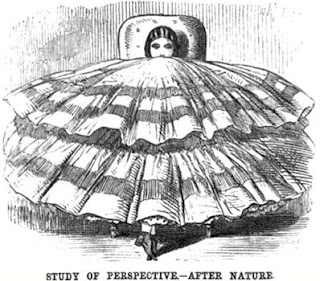 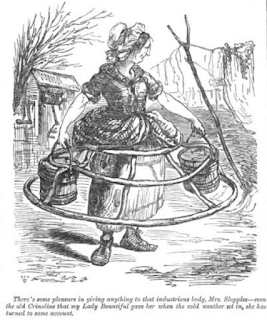 "There's some pleasure in giving anything to that industrious lady, Mrs. Slopples-even the old crinoline that my lady Bountiful gave her when the cold weather set in, she has turned to some account." 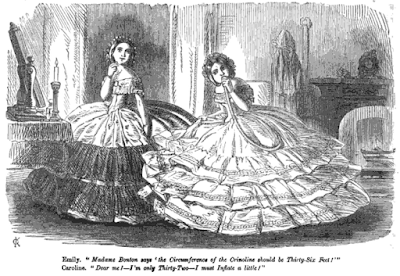 Emily: "Madam Bonton says the circumference of the crinoline should be thirty six feet!"
Caroline: "Dear me I-I'm only Thirty Two-I must inflate a little!" 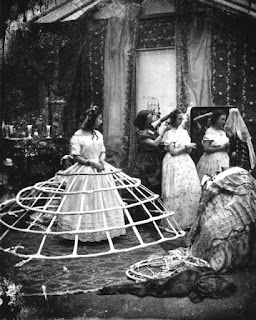 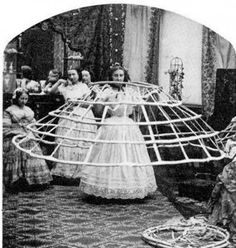 To view all of Punch's great cartoons, visit their website at
http://www.punch.co.uk/
Posted by Cindy at 7:05 PM