Every year, I produce a period fashion show for Gaslight Gathering Steampunk and Victoriana Convention.  This year's fashion show theme was Women of Sports and Leisure.  The models ranged from Regency and Victorian archery to Edwardian Croquet and everything in between.  We had a mother-daughter team in beautiful 1870s polonaises, an Edwardian dog-walker with real (service) dog to walk, a fencing team and a model with period underpinnings!  We had photography, painting, fishing, reading, piano playing, singing, sewing, ice skating, swimming, tea, badminton, golf, dancing, an Edwardian naturalist, and me...horseback riding.

I had been wanting to make the Truly Victorian 1883 Riding Habit Bodice and Skirt for quite some time.

In the rush of recruiting models, preparing a slide show and other things, I cut myself short on time for my own outfit.   I had the patterns and fabric for my riding outfit for months, but always said to myself, "I have plenty of time".  Well, with two and a half weeks before the show, I had nothing. 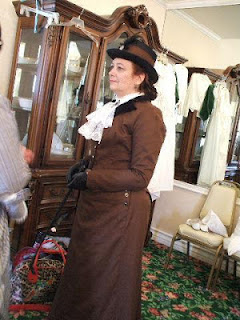 My dear friend Val stepped in and rescued me.  I cut out the jacket and gave her the pieces, and she made 95% of it for me!  I managed to sew in the sleeves, sew on buttons, make the skirt and jabot, and decorate the hat (again, Val to the rescue for the hat and veiling, found at JoAnn Fabric.)  I decided I wanted it buttoned down the middle rather than double breasted.


Here are some shots of me being nervous backstage before the show. 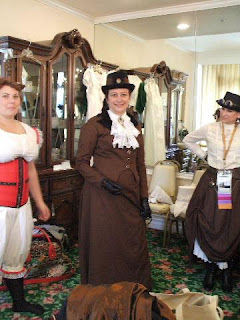 Here is a photo of Val and me.  She is wearing her Victorian Photographer ensemble. 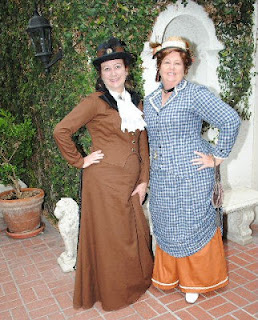 After the show was over, I took some photos in Jerry's photo booth. 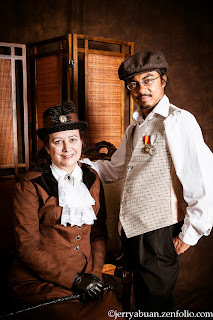 The show was a success, thanks to all the wonderful models.

The breakdown on this outfit is:

Jabot - stash lace
Brown twill - the last $$ on my gift certificate at JoAnns.