An accessory post until I get my current dress done!

In the late 50s and through the 60s, there was a wonderful purse designer named Enid Collins.   Enid was originally a fashion designer from Texas.   She combined her love of fashion and design and created beautiful works of art in her purses. 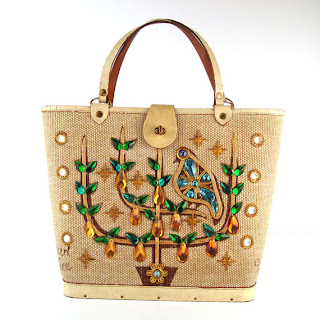 She made wooden mahogany box purses and the canvas bucket bag.  The bucket bag had a wooden bottom, leather trim, and was made from linen.  The backgrounds were often matte-screened or painted by hand. They were covered in jewels and sequins, each a work of art.  They are one of the most sought after vintage accessory today, and can cost up to $200 for some of them.


I cannot afford a real Enid Collins purse unless its a steal.  BUT, the Broke Costumer CAN afford an Enid knock off purse!  That is where my obsession starts.

There were plenty of women in the early 60s who could not afford their own Enid Collins Purse.  So, the General Crafts Corporation began producing make it yourself "Enid Style" bucket bags.  Called the Fabulous Jewel Tone Handbag Kit, you could select from any number of styles in either a natural or black background.  I remember as a child my mother even made one!  Of course, now that I want hers, she threw it out many years ago.  Here is a photo of a catalog page which gives you an idea of what you could make: 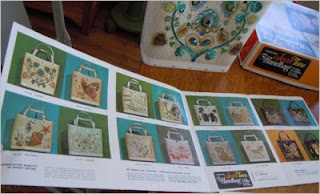 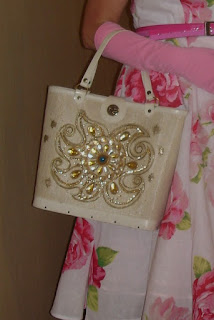 I started seeing Jewel Tones in the antique malls, but the average price was between $40-50. still too expensive for me.  I started looking on Ebay and Etsy, and found many of them - and for far less money.  Depending on condition, you can get some quite inexpensively.  My first Jewel Tone purse was No. 909 "Sunburst" Bag.   I took it to Costume College and it holds a lot! I only paid $12 for it on Etsy.

My second Jewel Tone was a great find - a rare Black Cat bag, completely unmade!  It had all the original hardware still sealed in little bags, all the sequins and jewels and even the original white glue bottle!  The glue is yellow now, but its still liquid inside. One problem.  It had no instructions.   And so it sat.  I looked for almost a year on line for a picture of the finished bag with no luck.  I didn't know where to put all the bling.

I got lucky about two months ago, and FINALLY found someone on line that was selling one, and had taken up close photos of the finished purse!  I used Jewel It glue and followed the picture.  I used my Sunburst bag as a model for how to put all the hardware on.  Here is a photo of the instructions and bag she posted, and my finished bag.


My third Jewel Tone is one I saw and fell in love with at an antique store, but it was $40.  I searched on line, and found one on Ebay for $6.99.  Its called No. 906 "Butterfly". It needs help, poor ugly thing.  The canvas was filthy, the hardware seemed rusty.  Many jewels were missing.  I  bought it anyway.    When I received it, it smelled.  I took oxyclean and a tooth brush and went to work.   It cleaned the canvas up nicely.  The rust came off.  Now all I have to do is go to Michaels and get some jewels to fill in for the missing ones.   Its going to look great! 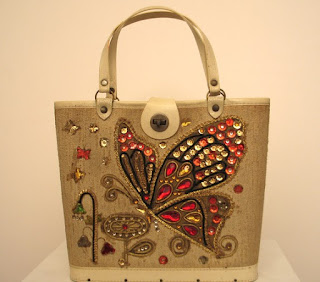 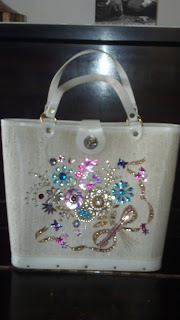 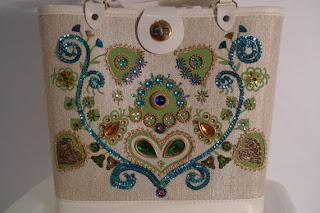 EDIT 3:  Boy these edits get better all the time.  I went to the swap meet today, and found a real Enid Collins bag called "Humdinger" for ONE DOLLAR!!! I think the lady selling was trying to get rid of grandmother's things and didn't know what she had.  Granted, the bag has a water stain and one large missing jewel, but I am going to try and get rid of the staining and I am ordering a genuine Collins replacement jewel for  the yellow flower petal.  I need to touch up the leather as well.   Here it is before the clean up.       (01-20-13) 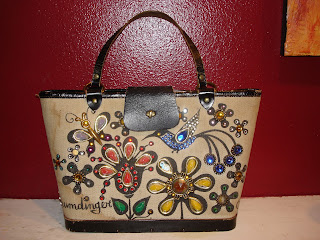 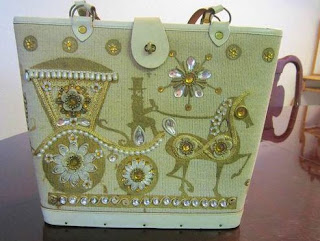 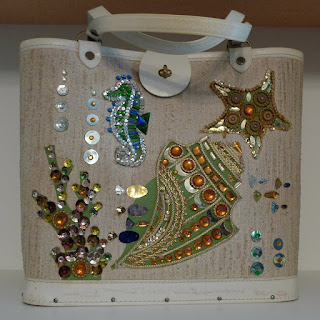 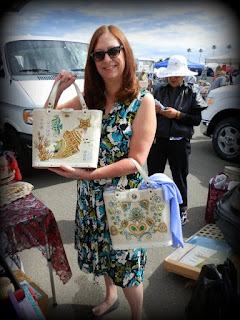