For All You Dr. Who Fans Out There!

My family has been planning since last Comic Con to attend this year's Con as Dr. Who characters.  My brother Tom has a screen accurate 10th Doctor suit, coat, shoes, tie, glasses, sonic screwdriver and several other items unique to the Doctor. My nephew Brian has an awesome 11th Doctor suit.  My daughter Amy, with long red hair, naturally became Amy Pond! 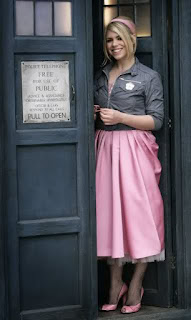 My sister-in-law Kathy chose Rose Tyler, dressed in 50's from the episode The Idiot's Lantern.  A trip to the fabric district in Los Angeles yielded the pink sequined fabric and pink crepe backed satin needed to make the dress. This was a delayed Christmas present for her from me.  Kathy purchased the jacket, the shoes and made screen correct jewelry.  I used a strapless ballgown pattern for the dress, shortening the skirt length.  At the first fitting, we discovered it was too long waisted and the skirt was not full enough.  So much for that pattern!  I took the skirt off and shortened the bodice by about two inches.   I also cut wider panels and added them to the skirt to make it fuller.  A zipper down the back (real fun to do in sequins) and an underskirt with a tulle slip and it was done!  To finish the look, Kathy bought the pink sunglasses - and a blonde wig which she had styled just like Rose's hair!  Kathy is a natural brunette, so seeing her blonde was a bit weird but she pulled it off wonderfully.  A bit later she switched from the pink pumps to pink tennis shoes so she could walk the exhibit hall. 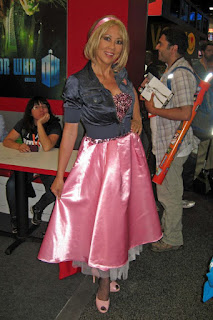 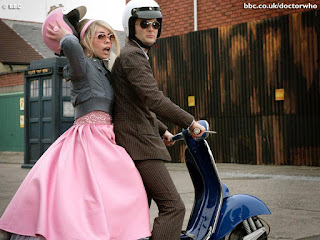 I decided about last October to be a Clockwork Droid from my favorite episode The Girl in the Fireplace. My brother is a wonderful maker of gadgets and electronic equipment (such as a steampunk time machine, a working R2D2(still in production) and other marvelous mechanical things!)   So for my birthday, he made me a screen accurate Droid weapon!  In case you don't have any idea what I am talking about, these Droids (and Dr. Who) have travelled to Madame du Pompadour's time where the episode takes place.  Therefore, they have disguised themselves as best they can as members of the French court.  Here is what they look like. 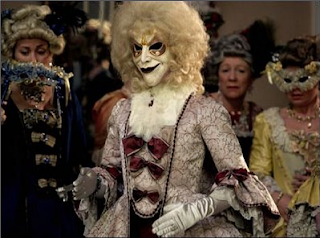 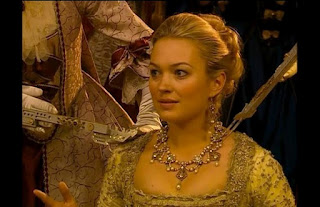 The arm piece/weapon looks like this:  Poor Madame du P!  My brother made me the one on the left.  Luckily I already had a similar dress, as one of the first costume I ever made was a Marie Antoinette dress for a tea in her honor.  I added the long white gloves and jester mask, which my mom bought me from the internet and gave to me as a gift.  The wig I used was originally a Victorian wig, but I only wore it maybe twice as it is not really my color.  So out it came, and I ratted it all out.  Here are the results of our family effort. 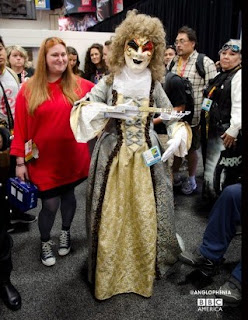 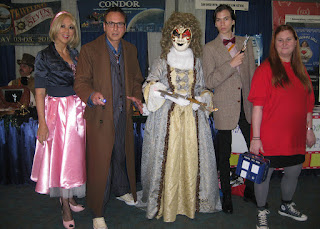 The pattern for this dress is Simplicity 4092.  Very easy to make, but I think the pattern has been discontinued.  The fabric was inexpensive polyester, probably no more than $2 a yard.  The trim was made with dark brown ribbon which I got for 33 cents a yard.  It was long stitched down the center and then ruched.