This is just a fun little post about our favorite neighbor, Ethel Mertz.   As an apartment building owner and landlord along with husband Fred, she is quite busy during the day attending to housework and rent collecting, and making mischief with her best friend Lucy.   Yes, I am an I Love Lucy fan.  I have been watching reruns for 40 years, and have probably seen every episode at least a dozen times.

As housewives did in the 50s, Ethel would wear an easy care house dress to attend to her duties.  In most episodes during the early seasons, when at home, Ethel wears a wrap around dress which ties in front, with handy dandy pockets.  If you watch closely, she is very fond of putting her hands in these pockets!

My guess is that most, if not all, of these wrap dresses are made by Swirl. They advertise ease of wear:  "Walk into it, Button Once, Wrap and Tie."   In the early 1940s they began making a garment called the Neat ‘n Tidy, and in 1944 the Swirl label were born. Actually, the Swirl was originally conceived as an apron.  In the early 1950s, Swirl began making dresses, a quick and easy wrap for the busy homemaker. The basic dress design was always the same: A wrap-around that tied and fastened with a one-button closure. The dresses were made in hundreds of variations using printed cotton fabrics with embroidery, applique, and colorful trims such as rick-rack. Source 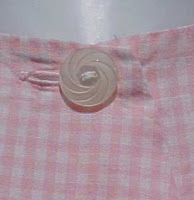 There was a signature "Swirl" button used for the closure in the back.

The following are some screen shots of some of her best wrap dresses.  Sorry, some are blurry depending on the clarity of the youtube/dailymotion videos.  She did wear the same dress for 2 or 3 different episodes, in keeping with her character's status. 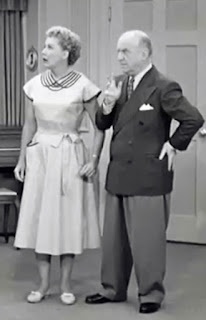 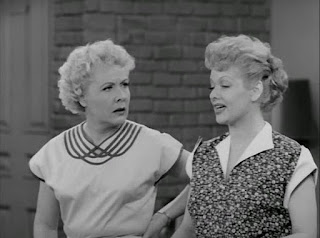 This dress, above and right, has great detailing around the neckline.  Note the signature pockets and tie.  Below is a cute floral print and decorative collar.  Below right, another dress with  rows of trim around the neckline, and also around the hemline.  Her hand is in her pocket here. The Arrow Dress.  Ethel wears the dress in this advertisement for Swirl (below) and a slightly different version of the dress Ethel wears in several episodes.  One of my favorites. 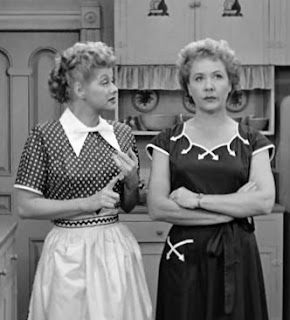 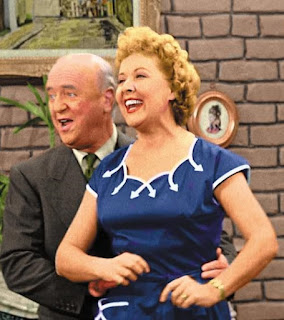 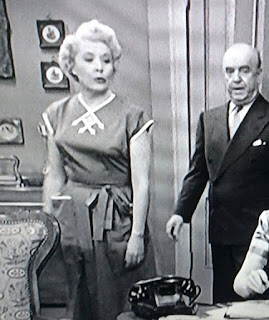 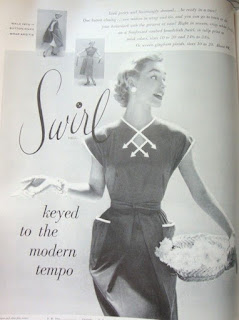 Below: This Swirl dress ad is from 1951.  Ethel is wearing the exact same dress, from two different episodes. I like the added flounce around the bottom. Ethel has her hands in her pockets again! She has both versions of this dress, the striped one in the ad is the last dress of this post. 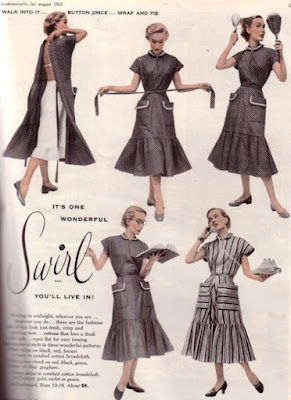 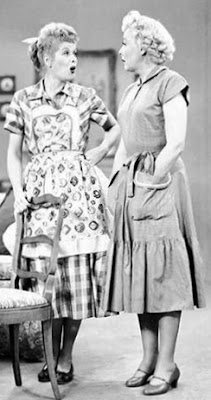 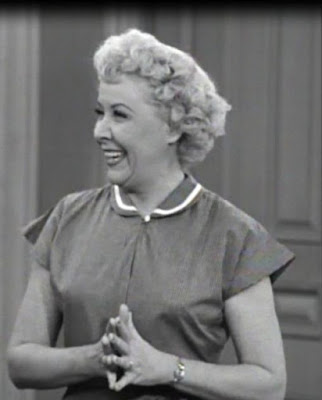 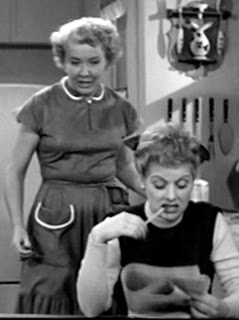 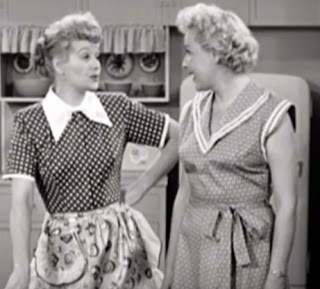 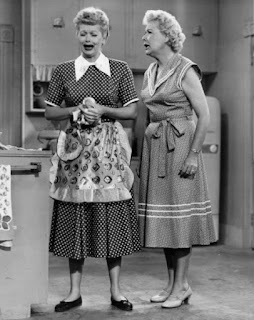 Here's a cute V neck style with two rows of trim around the hem. I also love these stripes, below. 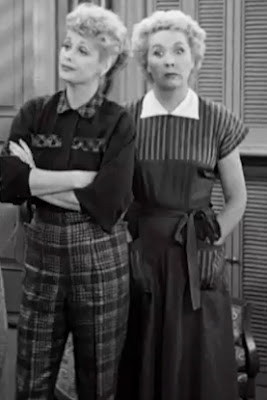 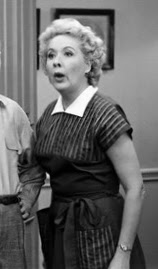 Below are some vintage Swirl dresses similar to Ethels. 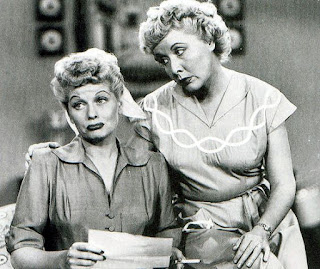 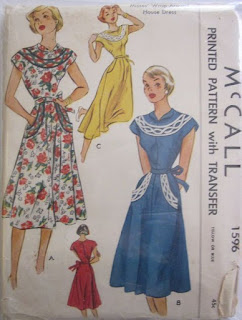 Why does Lucy look so sad above?   I think Ricky said she couldn't afford a new dress.  In the 1950s, a Swirl dress would set you back $9 dollars.  That's about $70 in today's dollars.  Lucy decides she better learn to sew so she can make her own, using this McCall's pattern which closely matches Ethel's dress.  Here are a few more look-alike patterns available in the 1950s: 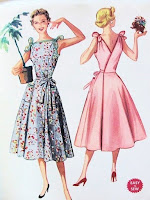 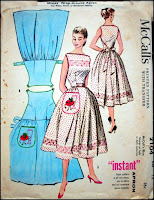 Trivia Quiz - Almost 20 years ago, I asked my boss at that time (also a Lucy fan) this question, and she got two out of three.  What three middle names did Ethel have in the show?   Answer at the end of this post.  Now a few more of her dresses. 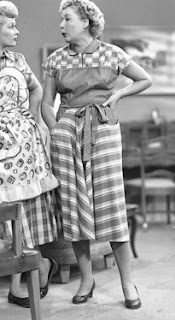 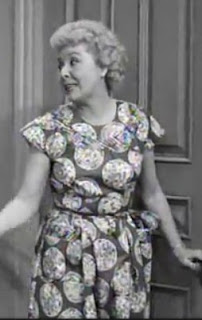 Ok, enough wrap dresses.  Did you guess the answer to the trivia question? 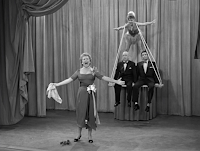 1.  Traveling to California, the Ricardos and Mertz' stop in Albuquerque to visit Ethel's father.  He asks her to put on a show at the local theater.  Hr father put on the Marquee, "Ethel May Potter, We Never Forgot Her". 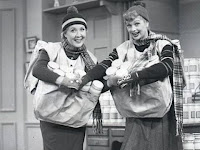 2.  Ethel and Lucy go on TV to sell Aunt Martha's salad dressing.  They receive so many orders, they realize they will lose money because they didn't figure postage into the price.  They load up shopping carts and knapsacks, and put on roller skates to deliver the jars personally.  Lucy grabs Ethel's hand and says, "Come, Ethel Roberta!" 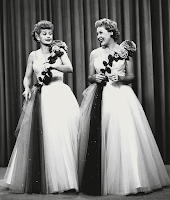 3.  Lucy and Ethel as co-presidents of their club, decide to do a duet on a television variety show featuring club members. They accidentally buy the same dress, and both promise to exchange them for different dresses (which of course they don't).  When Ethel gets ready to leave for the TV station, she is wearing the dress.  Fred looks at her and says "Why Ethel Louise Mertz!"